Australia will develop hypersonic missiles and counter defences in partnership with the United States and United Kingdom under an expansion of the allies’ trilateral security pact announced overnight.

Other new developments include the addition of electronic warfare and defence innovation systems to the three countries’ advanced capability development arrangements, and the plan to trial new undersea capabilities next year. 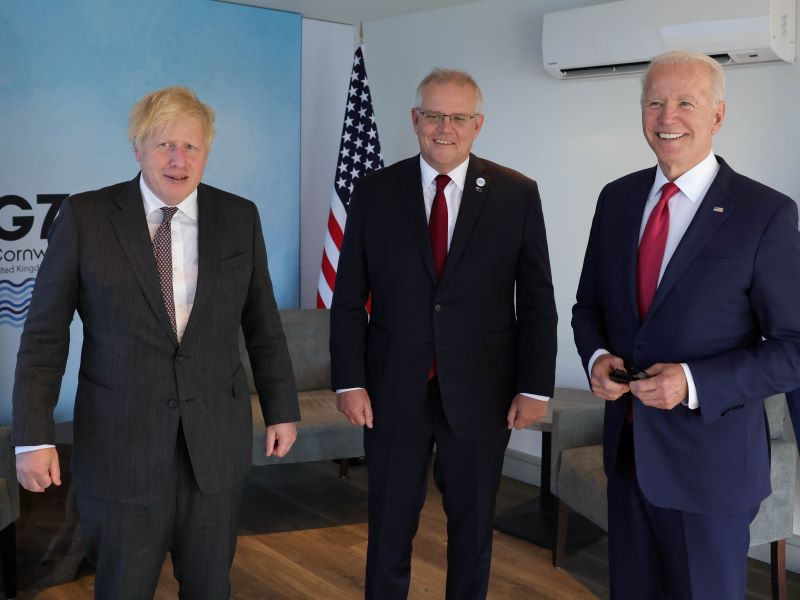 Leaders from the three nations released a new joint statement and fact sheet overnight, assessing progress made under the AUKUS pact.

“We are pleased with the progress in our trilateral program for Australia to establish a conventionally armed, nuclear‑powered submarine capability,” the joint statement said.

“We are fully committed to establishing a robust approach to sharing naval propulsion technology with Australia that strengthens the global non-proliferation regime.”

The latest statement reveals hypersonic and counter-hypersonic capabilities will be added as a new advanced capability to the AUKUS agreement.

This means the three nations will collaborate more deeply on missiles that can travel at speeds of Mach five or higher – five times faster than the speed of sound. China and the US have recently claimed successful testing of hypersonic missiles, while Russia last month claimed to have used one to destroy a Ukrainian weapons cache.

In Australia, the government has upped its investment in both hypersonic research and infrastructure, while the Defence Science and Technology Group has been testing hypersonic technology in conjunction with the US Air Force Research Laboratory since 2006. Defence minister Peter Dutton has talked about the importance of hypersonic missiles in recent months.

Local companies have also developed cutting edge hypersonic technology in Australia, but it is unclear how this might be leveraged by the AUKUS alliance, or if US Defence contracting giants like Lockheed Martin – already supplying hypersonic missiles to the US — will be the big winners of the new arrangement.

The new AUKUS statement provides little detail on how the hypersonic and counter-hypersonic capabilities will be developed.

“The AUKUS partners will work together to accelerate development of advanced hypersonic and counter-hypersonic capabilities.”

Under the AUKUS agreement’s other main area of focus, nuclear-powered submarines, Australia has been granted access to the classified discussions the US and UK have had on nuclear technology through a “treaty like” information sharing agreement rapidly developed and signed in February.

“The electromagnetic spectrum is increasingly contested,” it said. “The three countries will work together to share understanding of tools, techniques, and technology to enable our forces to operate in contested and degraded environments.”

“Our work on innovation aims to accelerate our respective defence innovation enterprises and learn from one another, including ways to more rapidly integrate commercial technologies to solve warfighting needs.”

The Australian government has recently conducted a review of its Defence innovation ecosystem but it is yet to be released to the public.

While undersea capabilities is an original targeted area for AUKUS collaboration, along with quantum, cyber and artificial intelligence, the latest statement reveals trials of undersea autonomous vehicles will be trialled next year. Quantum technology trials will occur over the next three years.

The joint statement acknowledges the early progress under AUKUS, including the planned east coast submarine base, a nuclear-powered submarine construction yard in South Australia, and engagement with the International Atomic Energy Agency on non-proliferation.

“Initial steps” have been undertaken to upskill an Australian workforce to “build, operate and sustain” the nuclear-powered submarines, the statement says, noting a cohort of Australian personnel have commenced higher-education and training opportunities in nuclear science and engineering.