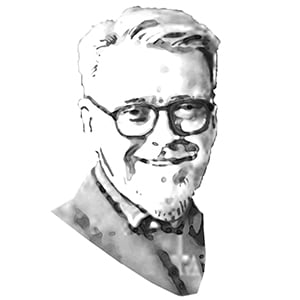 We tend to treat these resources as separate inputs rather than as an ecosystem. There’s also a constant discussion about how we systemise commercialisation (innovation’s child).

Commercialisation is dynamic. Innovation and commercialisation are team sports and don’t happen if we support one resource in isolation. Without demand, technology stays shelved. Without talent, no new technology is created, and without capital, there’s no investment. 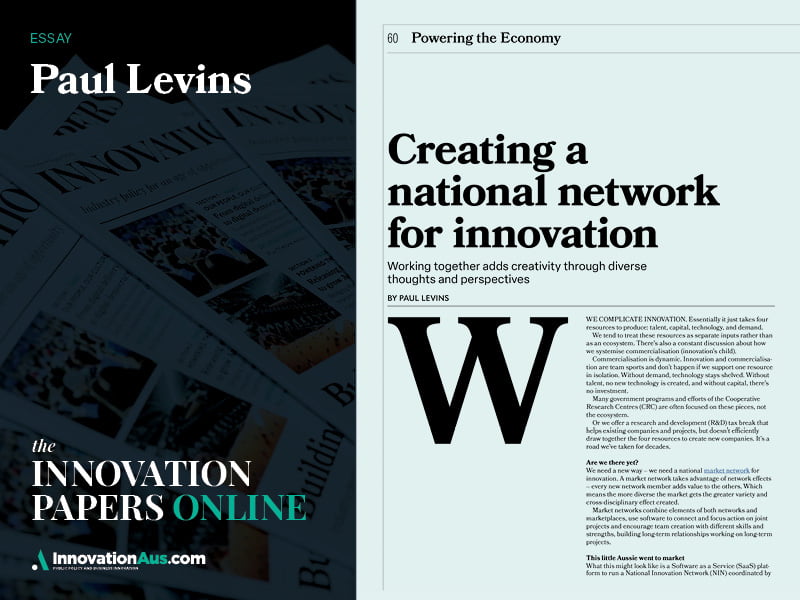 Many government programs and efforts of the Cooperative Research Centres (CRC) are often focused on these pieces, not the ecosystem.

Or we offer a research and development (R&D) tax break that helps existing companies and projects, but doesn’t efficiently draw together the four resources to create new companies. It’s a road we’ve taken for decades.

Are we there yet?

We need a new way – we need a national market network for innovation. A market network takes advantage of network effects – every new network member adds value to the others. Which means the more diverse the market gets the greater variety and cross-disciplinary effect created.

Market networks combine elements of both networks and marketplaces, use software to connect and focus action on joint projects and encourage team creation with different skills and strengths, building long-term relationships working on long-term projects.

This little Aussie went to market

The Agency would create and curate a network of innovators who can elect to work together to offer solutions to described problems. NINAA would utilise open innovation principles to redefine problems and it would be open to all sectors to lodge problems and solutions.

Without problems there’s no solutions

The redefined problems could be accumulated into a national problem ‘bank’ which would become a national library of problem definitions to be referred to and updated reflecting progress in the field over time.

NINAA would actively seek sources of capital and demand to participate in the network and inform the selection of solutions working with investors. There might be opportunities to sponsor the network in broad or sponsor a specific challenge.

Innovators would receive payment for their solution if selected or be prioritised for grant programs that presently exist. NINAA could also host a list of all startups defined by service in a searchable database. There are some examples of this type of national network globally.

At this point, the closest model is perhaps the European Institute of Innovation and Technology (EIT). But this proposal has some different elements, like the problem redefinition component, the problem library and open membership.

Imagination is more important than knowledge

Research suggests that to maximise the benefit and minimise the risk of innovator and inventor networking, companies need to aggressively build connections outside of their specific disciplines and industries.

These less obvious connections help surprising new combinations of ideas and imaginations to be produced that can lead to unanticipated breakthroughs and new revenue streams. And studies increasingly stress that external knowledge is critical to triggering successful innovation and regional development.

The NINAA could tackle problems of private interest and national and global impact. It could support the national science and research priorities or be an external source of solution provision for the Commonwealth Scientific and Industrial Research Organisation (CSIRO) or other research institutions.

Problems of national or regional scale could also be distributed across the network, supplementing the efforts of national institutions. For example, the proposed Advanced Strategic Research Agency (ASRA) could utilise the network.

ASRA is welcome news. With aspirations to be like Defense Advanced Research Projects Agency (DARPA) (with which it is intended to work closely), ASRA will ‘boost Australia’s involvement in technology sharing and research and development’.

A national network of innovators would be a powerful adjunct. If we examine how DARPA works, their projects tend not to be open-ended research programs. They are intense and ambitious, form temporary teams, with finite timeframes.

That makes them attractive to the high-caliber talent. The nature of the challenges inspires unusual levels of collaboration. In other words, the projects draw great people to tackle great problems with other great people.

Not a light bulb but a string of lights

Many of the problems we have today exceed the abilities of companies and individuals alone. The light bulb moment does happen but it’s more common that innovation is down to teamwork. Working together adds creativity through diverse thoughts and perspectives.

If you look at the success of DARPA or the famous original Moonshot, government stepped in to align lots of innovators around big problems. Whole industries were created because government set a direction and thousands of problems and solutions flowed.

Most often that direction has been around military industrial complex goals. But networking our innovators to work on problems companies put forward, as well as very large integrative projects would be powerful.

Government could set a national direction like the ‘moonshot’ we often reference in innovation discussions. We say Australia suffers the ‘tyranny of distance’. Bringing us closer to rest of the world would make a great challenge (for ASRA and NIN).

Elon Musk already proposed this: travel anywhere in the world in under an hour. Why isn’t proximity our moonshot? It could focus not just on physical travel but also build industrial expertise in 3D hologram display, metamaterials and other technologies that help to close distance. Imagine the industries we could create.

A national innovation network would enliven our national innovation effort. A place for innovators to congregate; to lodge new problems to be redefined; for capital to find new ideas; to find startups; and a place for commercial demand to back de-risked solutions founded on national thought and talent.

So, when it comes to innovation, by all means, let the market decide. But let’s establish an innovation marketplace where those decisions occur more efficiently and frequently.

Paul Levins has an extensive career as a founder, senior executive, and government adviser. He co-founded EverCase, a revolution in the cold supply chain; Xinova (now Rhizome), a global open innovation company based in Seattle with a network of 12,000 innovators that solved problems for companies including PepsiCo, Honda, Hyundai, Gates Foundation and others; and Souszen, a kitchen management platform. He is Principal at Beanstalk, an open innovation consultancy focused on food and agriculture, and he advises Bijusoft, a global artificial intelligence consultancy. Previously Paul was a senior executive at a $700 million fund focused on invention creation. He was Executive Vice-President at ICANN which co-ordinates the global Internet’s unique identifiers.

Here is an innovation taxonomy for success