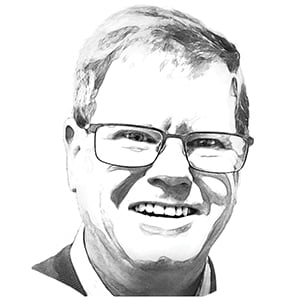 Australia has a problem. An innovation problem. But not the problem most people imagine. It isn’t that we lack highly-educated individuals who are good at research – we have plenty of those.

It isn’t a dearth of great ideas – we punch above our weight when it comes to great ideas. It isn’t that we have a deficit of people willing to ‘have a go’ – we are well endowed with folk like that.

Australia’s innovation problem relates to the failure of great ideas making it through what is called the ‘valley of death’. Hard working, intelligent entrepreneurs with important innovation initiatives often find they are unable to get past the conceptual or prototype stages; or their innovation withers away due to a lack of funding or, importantly, the know-how about where to get the best advice and support. 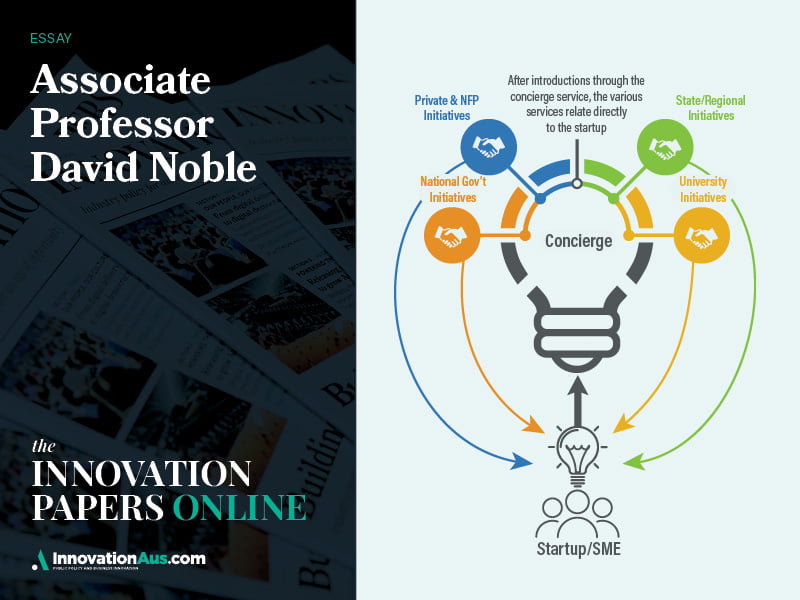 It isn’t because we lack government and private support for entrepreneurs and innovators – a recent report listed over 100 separate government initiatives and a further 55 public and private accelerators, incubators, co-working spaces, and innovation hubs in Australia.

There are many factors leading to Australia’s innovation problem. But one factor that has been identified – and New South Wales is taking baby-steps to overcome – is the sheer complexity of the Australian innovation ecosystem.

Imagine you are an innovator with a great idea, standing at the bottom left hand of Figure 1. How do you navigate your way through the maze? Sure, there are lots of options – but for many entrepreneurs, the plethora of options simply leads to confusion, dead-end turns, and even their great idea ending up in the valley of death.

A solution that has been tried and tested in many places overseas and has recently been adopted (albeit by a different name) by the NSW Innovation and Productivity Council, is an innovation concierge service.

My colleagues and myself, in a report to the Council, defined an innovation concierge service as a single point of contact with appropriate advisory facilities, and with strong linkages into the research and financial support services, to strengthen and facilitate innovative startups.

Although the term ‘concierge’ isn’t quite common parlance in Australia yet, it captures, we would argue, various terms that are currently used in an undefined and undifferentiated way to describe services in support of entrepreneurs and innovators.

A concierge service acts as an intermediary, linking innovators to the targeted support that best helps them avoid the dreaded valley of death.

The service, as an ‘honest broker’, provides impartial support to entrepreneurs unfamiliar with the maze that is Australia’s innovation ecosystem (shown in Figure 1).

The service connects the innovator to the most appropriate government (national, state, local), not-for-profit and for-profit services, and the researchers who can best help the innovator.

Figure 2 shows how the innovator approaches a single point of contact, who guides them to the various required service, whether that be research, funding, or other forms of guidance.

The most important element is that the innovator doesn’t waste time going down dead-ends, and their innovation ending up lost to the national economy.

Why this model works

Because it is working in other countries. Not that we should simply transplant a policy initiative from one country to another. But we can learn from successful initiatives overseas and craft a local response.

From Canada’s Industrial Research Assistance Program (IRAP) service to Scotland’s Interface program, to JIC in the Czech Republic and Business West in England, various versions of the concierge service are in action.

They rarely use the term ‘concierge’, and in fact the NSW Innovation and Productivity Council use the terms ‘Connector Model’ and ‘Business Hub’ for its initiative. But they undertake similar roles.

Why is this important?

The majority of employment in Australia is through small-to-medium enterprise (SMEs), which tend to be stable and, when they experience growth, increase at a modest level. Many policy initiatives rightly focus on the SME sector.

But, if the nation wants businesses with exponential growth to aid economic development, then this will more likely come from ‘young high growth firms’. It is the entrepreneurs and innovators who provide the extra stimulus to the national economy, through the development of new products and even industries.

This results in increased employment opportunities for Australians, increased tax revenues that benefit the country overall and, importantly, increased local capability for when crises such as COVID and geopolitical turmoil occur.

And, increased capability is where the activity in Figure 2 leads. A concierge service supports an entrepreneur through their first innovation, and in that process the entrepreneur learns to navigate the innovation ecosystem.

They may get ‘stuck’ occasionally and return to the concierge service to develop, for example, a new research relationship, but generally they develop their own capacity and networks.

In fact, they often become mentors to other entrepreneurs and thereby strengthen the overall national innovation ecosystem.

What sort of concierge service?

A few years ago, NSW experimented with the NSW Innovation Concierge, an Artificial Intelligence (AI)-based website that sought to support innovators. After an initial flurry of excited use, the service saw a fairly rapid decline.

Feedback from staff supporting the service indicated that users needed more than just AI – they need to talk to a human who understands their needs and who can connect them with the best service.

It could be argued that the new NSW ‘Connector Model’ is seeking to accomplish that at a local state-based level, by aligning the excellent Service NSW facility to bring the best of human and technology together.

The recent name and direction change of the CRC Association to ‘Cooperative Research Australia’ is another example of an excellent Australian initiative at a national level.

However, as a membership-based organisation, an entrepreneur must first know they exist, find them, join them, and the complexity continues. Individual organisations are important, but visibility and accessibility are, perhaps, even more important.

I don’t want to under-estimate the investment required for such a service at a national level. Australia is a country that is, in many ways, as diverse as Europe. A blanket, uniform approach will likely founder just as if it was applied to a multi-country regional area such as Europe or Asia.

A national concierge service is more likely to be a federation of local and state services that operates as a coordinating body that aggregates, and makes available, information throughout the network.

But it will also be the peak body that represents entrepreneurs and provides policy advice, with the investment ultimately paying back in spades.

Associate Professor David Noble is the Associate Dean (Education) at Southern Cross University’s Faculty of Business, Law and Arts, and a public administration researcher focussing on national systems of innovation. His research examines the interaction between government policy, and SMEs and start-ups, in innovation and entrepreneurial ecosystems.

Clusters are a hotbed for high-growth companies