The Minister for Industry, Energy and Emissions Reduction, Angus Taylor, is technically the minister in charge of implementing the federal government’s commitment to net-zero emissions by 2050.

Despite being labelled ‘technology, not taxes,’ the minister has a habit of demonstrating he has no idea what happens in the power system.

The first of these began:

“The Morrison Government is taking action to safeguard the delivery of affordable, reliable power for consumers through a proposed change to energy laws to require energy companies to give a longer period of notice for the closure of electricity generators.”

‘Taking action’ is hardly a strong claim, given that all the Minister has done is proposed a rule change to the Australian Energy Market Commission. That rule change proposes extending the existing notice provisions from three and a half years to five years. The rationale offered is that the lead time for new investments to be developed and constructed is longer than the notice period.

This proposition lacks credibility. Firstly, nothing has changed in the time to develop new investments since the current rule was first implemented. More importantly, new generation investments aren’t made according to closure schedules; they are made as opportunities to make a profit exist. An investment with near-zero short-run marginal cost likes competing against a coal plant since all the participants get paid the same clearing price.

There can be no neat process whereby 2,880 megawatts of generating capacity will enter the market on the day Eraring closes. A mixture of wind will replace it, solar and storage (both batteries and hopefully pumped hydro) made in units of 100s of megawatts.

But Taylor also confuses cause and effect. Coal-fired power stations are closing earlier than their expected life because renewable generation is progressively making them uncompetitive.

It is as if the minister hasn’t read the Draft 2022 Integrated System Plan and its conclusions about coal closures.

For example, the plan states on page 44 that ‘Current announcements by thermal plant owners suggest 5.4 GW of the current 23 GW of coal capacity will withdraw by 2030, but the modelling suggests 14 GW is likely to withdraw by then’ in the scenario considered most likely (Step Change).

They even provided this information pictorially in Figure 18 for people like Minister Taylor, who seem unable to read. 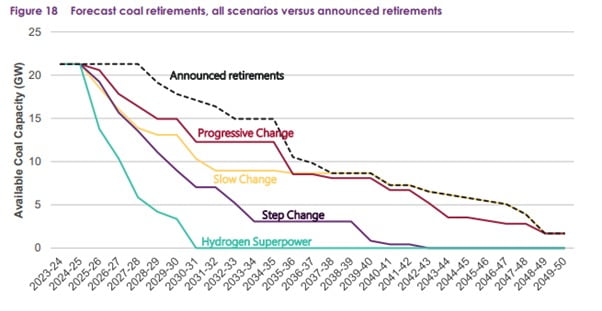 The minister’s apparent inability to read infects his second media release. In announcing the $75.8 million underwriting for the early works on VNI West, he tries to take a swing at Labor policy. He states:

“We won’t do what Labor is proposing, which is to gold-plate the grid by spending $20 billion of taxpayers’ money on transmission lines that are not considered actionable by the Market Operator. Labor’s approach is exactly what the ISP was designed to prevent – a return to reckless gold-plating and a tax on consumers for decades to come in the form of higher electricity bills. It is the same mistake Labor made when it was last in government. Back then, overinvestment in Australia’s electricity grid saw network charges increase by nearly 70 per cent between 2007 and 2013.”

These comments firstly misrepresent the function of the ISP. It exists to identify transmission development. In its first iteration, all proposals were subject to a full Regulatory Investment Test – Transmission. Under rule changes made by Energy Council, the ISP can identify ‘actionable’ ISP investments by undertaking a cost-benefit analysis of the proposal.

It also misrepresents the source of the increased network charges from 2007 to 2013. There were two causes; overinvestment based on errors in demand forecasts and highly deficient rules for economic regulation. To the extent that the Federal Government can be blamed for these, it is the Howard Government because the rule changes occurred in 2006, and that was the same year forecast errors started to emerge.

The minister apparently hasn’t (successfully) read Labor’s Powering Australia policy because if he had, he would have read Labor’s plan that:

“Australia’s electricity network was designed for a different century. This $20 billion investment to modernise and rebuild Australia’s ailing grid is in line with a blueprint already completed by the Australian Energy Market Operator and signed off by all governments.”

That ‘blueprint’ is the Integrated System Plan.

With the election now called, the minister won’t be writing new rule proposals or funding decisions. But we can expect a lot more releases that misrepresent either how the power system works or the stance of their opponents. Whether this is simply a lack of understanding or willful misrepresentation is hard to judge; either is less than we should expect from a minister.