Sydney company Samsara Eco has won the Energy and Renewables category at the InnovationAus 2022 Awards for Excellence for its innovative infinite recycling solution. 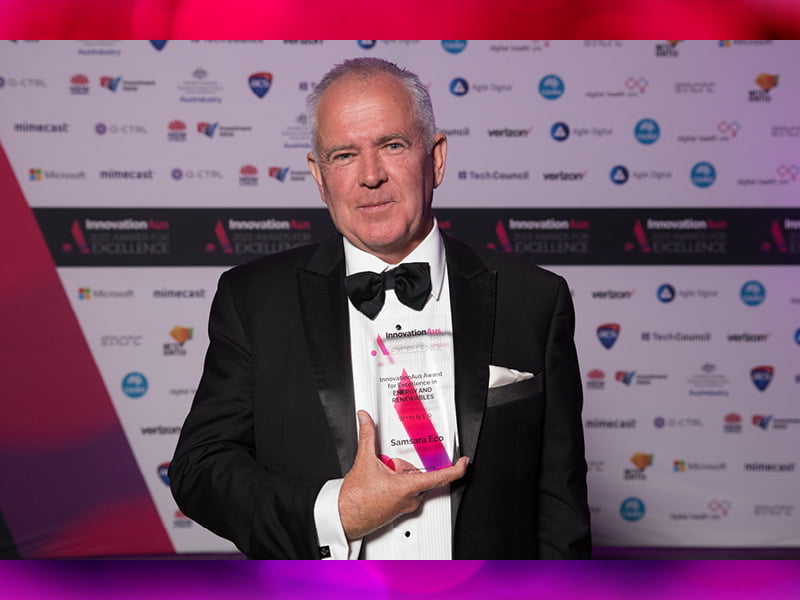 “There’s been a lot of hard work put in by the team. But we’re dealing with quite revolutionary technology, and we’re very excited about what what a difference this can make,” Samsara Eco chief executive Paul Riley said.

Tech companies will play a central role in Australia reaching its net-zero greenhouse gas emissions goal, which has now been baked into legislation.

The passing of that bill this year was a watershed moment for companies operating in the energy and renewables space, and there has never been more money on offer to companies with an innovative offering in this space.

Samsara Eco won the award for its pioneering infinite recycling technology which is aiming to end the major climate problem of plastic solution.

The company has developed a plastic-eating enzyme that can break plastic back down to its core molecules, meaning it can then be used by manufacturers to produce brand new plastic items.

The enzyme, developed with the Australian national university, depolymerises plastic waste and allows for the reuse of its monomers in producing food grade plastics with the same characteristics as virgin plastics.

Samsara Eco was founded in 2018 by Mr Riley. It recently raised a $54 million Series A funding round which will be used to build its first plastic recycling facility in Melbourne, with a goal of reaching full-scale production by 2023.

Woolworths has also made a deal for 5000 tonnes of Samsara Eco’s polyester product.

Samsara Eco buys or sources waste plastics from facilities around Australia, and uses its enzymes to break these products back down to their core building blocks, which can be reused to make new products.

“We need other companies to follow. If you look at what we’re hoping to achieve — processing 1.5 million tonnes of plastics by 2030 [per annum]. It sounds ambitious, but it’s only 0.375 percent of the world’s plastic market. We need everyone to succeed if we’re going to solve the plastic crisis.”

Cresstec, Boundary Power and DUG were highly commended in the category.

Cresstech has a number of innovative inventions including in refrigeration and air-conditioning, and was highly commended for its REED energy saving and leak mitigation technology for commercial HVAC-R Systems.

Boundary Power is a joint venture between Horizon Power and Ampcontrol Limited and offers stand-alone power system designs and technologies. It was highly commended for the Solar Qube product, which supplies medium to large loads for a range of sites.

DUG helps its clients to leverage large and complex data sets, and also builds and runs some of the most powerful and sustainable supercomputers in the world. It was highly commended for its DUG Cool product, a patented cooling system aimed at reducing energy usage and costs for data centres.