Communications Minister Paul Fletcher has published what he describes as a “mini-book”: Governing in the Internet Age. This is a mini-review based only on his National Press Club Address on the same topic.

Column: Governing in the Internet Age is Paul Fletcher’s second book, following his earlier Wired Brown Land. Coverage of his National Press Club Address unsurprisingly focussed on the Australian Government’s skirmishes with the behemoths of the internet, including Facebook, Twitter and Google.

This mini-review of the speech covering the mini-book will focus on three areas. The first is Fletcher’s opening remarks about government and telecommunications development and a closing remark about Australia’s rate of takeup of technology. The second is about two areas of activity, content regulation and market power. The third is the five principles for government enunciated in the speech. 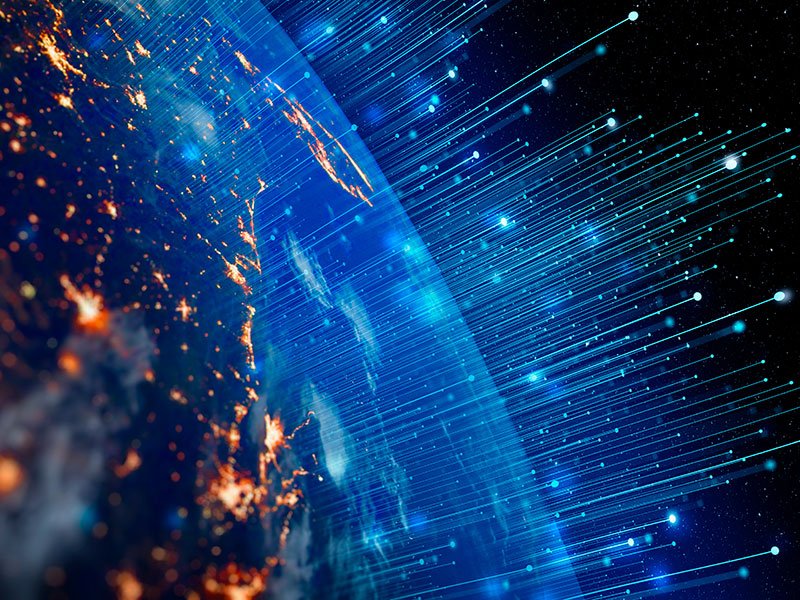 Fletcher starts by asserting that “the internet’s remarkable growth, after it arrived in the nineties, caught governments by surprise”. This assertion is certainly true for the government to which he was an adviser, but it wasn’t true of the Labor government from 2007 to 2013. Not only did that government commit to building the National Broadband Network (NBN), but it also had a comprehensive digital economy strategy and at least tried to address some of the pressing content issues.

Certainly, Fletcher’s view as late as 2009 indicated that the internet wasn’t really a critically important issue for the government. For example, in his earlier book, he stated concerning events of 2005 that “Telstra’s claims of a broadband crisis were overblown”.

My review of his 2009 book noted that “Fletcher mounts the case that Telstra first stifled the development of broadband in Australia, and then attempted to mount a regulatory case based on the crisis in broadband”. My review further noted that “the book ultimately strays as a history…in the way it ascribes one motive and one motive only to Telstra’s FTTN proposals, that is, to stymie the DSLAM builds of their competitors”.

The speech compounds this selective reading of history in the assertion that:

“Over the same period, deregulation, privatisation and competition came to telecommunications in many countries, including Australia, where historically there had been a government owned monopoly telephone company. This meant it was not just technically possible to send data between computers spread around the world; thanks to sharp price drops and new services from the telcos, it was economically possible for companies, and even individuals, to do so.”

The “same period” is not closely defined; it could be starting anywhere from the development of packet switching in the 1960s, the advent of PCs in the seventies, the web and the PC in the eighties, or the browser in the nineties. Irrespective of that, the assertion is that deregulation and competition resulted in sharp price drops in communications services.

It is easy to be misled because the Australian Competition and Consumer Commission (ACCC) has published telecommunications price indices since the advent of full competition in 1997, and these do show price declines every year. However, a more extended price index is available in the Consumer Price Index data from the Australian Bureau of Statistics.

The chart below shows the real telecommunications price index from 1980 to June 2021. The three yellow ellipses highlight periods of intense policy discontinuity. The first is the period from the first consideration of reform with the Davidson inquiry to the eventual introduction of limited facilities-based competition. The second is the introduction of full competition, and the third is the NBN/Multi-Technology Mix implementation period. Three linear trend lines are also plotted. The green line is the trend line for the full period. The policy perturbations highlighted show increases and decreases away from this trend, but they cancel out. The blue trend line is just for the period from the declaration of Unconditioned Local Loop (ULL) to the start of the NBN (2000-2010) and shows a slower rate of real price decline than the overall trend, while the orange line is for the post NBN period and shows a sharper decline than the whole period trend. 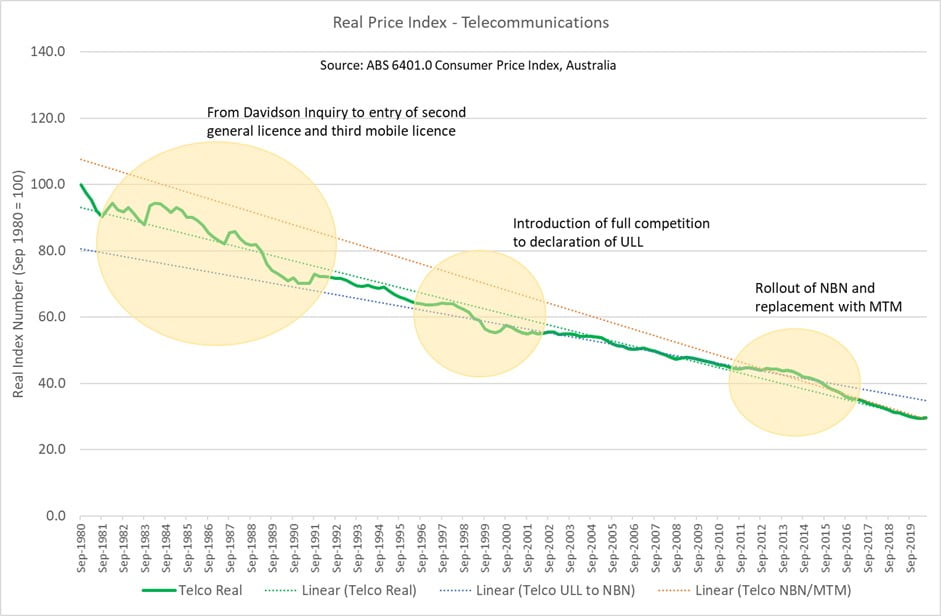 The only reasonable conclusion is that policy reform has only had temporary impacts on real prices. Changes in technology costs and the ongoing realisation of scale efficiencies have driven the price decline.

The third big claim Fletcher makes is reserved for the conclusion. This claim is the trope that Australians are a nation of “early adopters”. It is hard to put the data together for this, but there are differences between the S-shaped adoption curves in Australia when compared to other Western countries. The chart below for the adoption of mobile (cellular) phones per 100 inhabitants is just one example. Australia (the green curve) starts more slowly than other countries, but the adoption rate increases rapidly in the middle.

One way to mathematically generate S-shaped curves is the logistic function. This function uses a parameter that is a proportion of the people who have already adopted the technology. That parameter then determines what proportion of people who haven’t already adopted will do so in the next period. The single parameter can be thought of as “how much others influence you”. The Australian curves indicate the adoption by others more heavily influence us. More simply, we aren’t early adopters, but once the technology gains a foothold, we become rapid followers. 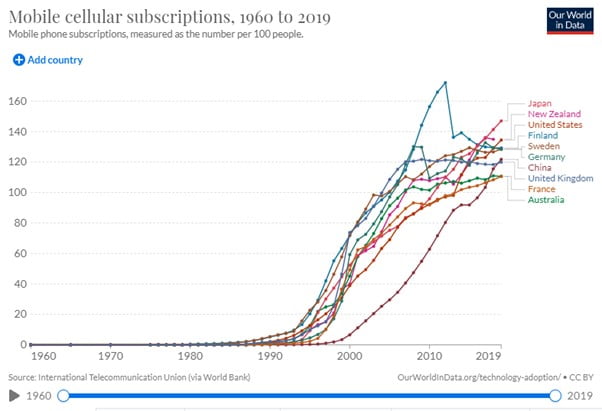 Moving to the policy areas, Fletcher first describes the work the government is doing on content regulation. This is all valuable work; however, some of it isn’t new. For example, former Labor Senator Stephen Conroy’s efforts to impose an internet filter (more on this later) so that content prohibited from publication offline couldn’t be accessed online. The effort highlighted significant shortcomings in the National Classification Code.

On the topic of market power (in the context of the News Media Bargaining Code), the minister says the government started working on it with the digital platforms inquiry in 2018. However, that market power would be a problem in markets with “demand-side economies of scale” was flagged at an ACCC regulatory conference (by me) in 2002.

The first principle is expanded upon only by reference to moving transactions with the government online. This columnist has previously criticised this narrow focus by the government on what it can do to develop the digital economy.

The second is an interesting observation from a minister who is refusing Freedom of Information requests about the car park project heavily criticised by the Auditor General. The government deserves credit for the information provided through data.gov.au, but it could further develop a positive stance on publishing documents on the internet. For example, in New Zealand, all cabinet papers must be proactively released and published online. Publication must happen within 30 business days of final decisions being taken by cabinet unless there is good reason not to publish all or part of the material or delay the release beyond 30 business days.

While it is good to see Fletcher acknowledge the imperative to foster an open, globally competitive economy, it is always worth remembering that this now commonly accepted stance was a policy breakthrough by the Hawke-Keating partnership. As a principle of government relating to the internet, “reinforcing the imperative” is relatively weak.

That the rule of law needs to apply online as well as offline, the fourth principle, only seems significant because so many people have tried to argue the reverse. Every time a government spokesman makes this claim, I get a text message from my former boss Senator Conroy. None of the current government ever came out strongly in support of the principle at the time, choosing to side with a libertarian fringe who genuinely claimed that the laws of civil society need not apply to the internet.

And, of course, the fifth principle also came into play in that debate. The repeated refrain was that the Australian Government could do nothing about it or that trying to regulate the internet in any way immediately made you into a totalitarian state like China. However, simply stating the principle of not giving up sovereignty doesn’t make it easy. Nor should unilateral action be the only option.

The biggest challenges with the internet are shared globally. Australia isn’t the only country grappling with content regulation, market power or malicious actor issues. For example, content regulation could be pursued globally under the approach used by television stations to classify content. The Domain Name System could have a simple field for classification that covered the whole domain that both service providers and browsers could interrogate to implement strict controls where warranted or provide content warnings otherwise. The field could be two-part, the first identifying the classification scheme, and the second the classification that has been given.

Combatting scams is equally a global challenge. It isn’t enough to keep playing whack-a-mole in Australia, closing down the vectors for scams. It is the hosting of scams that needs to be eliminated. Unfortunately, the Morrison Government has what I have previously described as a “particularly robust version of nationalism”. Australia is well placed to lead global solutions as it is a middle power that bridges the Anglosphere and the Indo-Pacific, but we choose not to.

Despite my overwhelming conclusion that as a historian and socio-economic analyst, Fletcher makes a good politician, I am nonetheless looking forward to reading the mini-book. I may be pleasantly surprised and find more depth in the book than the speech. I suspect, however, that the curator of the series In the National Interest, of which this volume is part, will be reconsidering including current ministers as authors.

David Havyatt was employed by Hutchison, AAPT and Unwired to head their regulatory function and provided services to Austar, PennyTel, and CommsAlliance between 1996 and 2011. In this period, he worked with Fletcher on the precursor to the Terria consortium that bid for the original NBN tender (AAPT, however, withdrew from the consortium, a decision made after Havyatt left them.) From 2011 to 2014, he was an adviser to Labor ministers and the shadow minister for communications. A long-term (though occasionally lapsed) ALP member, he has only once actively campaigned for a Liberal Party candidate, having handed out how to vote cards for Mr Fletcher in his by-election win in Bradfield (noting no ALP candidate was contesting the election).