Australia needs a fundamental change in its approach to innovation and exports to capitalise on the government’s $1.5 billion Modern Manufacturing Initiative, according to the scheme’s chief architect Andrew Liveris, who says the federal policy should guide an overhaul of the national economy.

The former chair and chief executive of Dow Chemical, Mr Liveris this month warned of Australia’s worsening economic complexity numbers and decades of innovation policies which had failed to prepare the country for a more digitised, sustainable and competitive world.

Mr Liveris said while the nation had fared well in handling the pandemic and is still among world leaders in wealth rankings, Australia currently lacks “sufficient innovation and ambition” for a fast-changing global market and geopolitical disruptions and may have become “complacent”.

“I am concerned about our appetite for innovation and entrepreneurship,” Mr Liveris said at the University of Sydney Warren Centre for Innovation Lecture earlier this month, where he urged stakeholders to “reset the Australian economy”.

Mr Liveris advised both the Obama and Trump administrations on manufacturing, and was a special adviser to the Australian Government’s National COVID Commission Advisory Board last year, which led to the government’s “gas fired” pandemic recovery plan, subsequently endorsed by Mr Liveris.

At the University of Sydney innovation lecture earlier this month, he called for the building out of ecosystems based on successful models in Ireland, Luxembourg, Canada, Israel and Singapore, where long-term, bipartisan innovation policy fosters strong pubic-private partnerships, supports R&D and manufacturing hubs, and ultimately leads to higher commercialisation of IP. 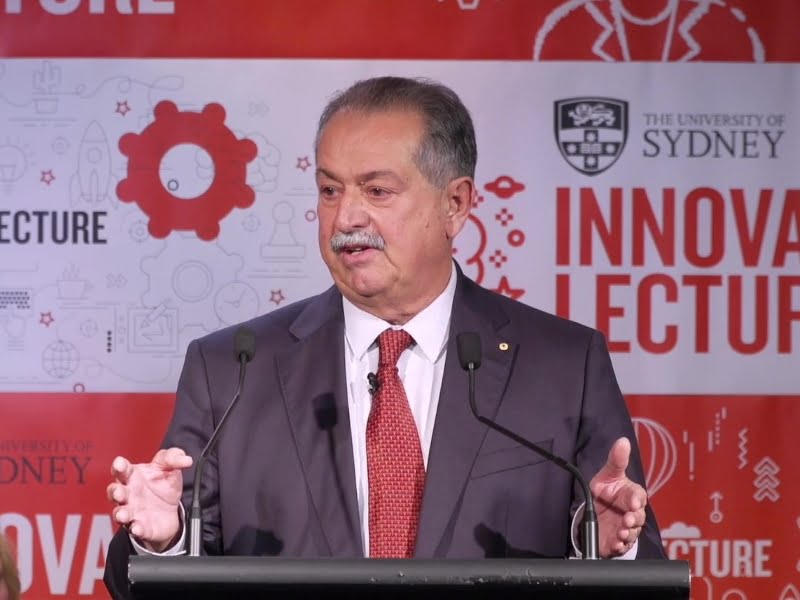 In successful foreign innovation ecosystems, public servants also moved quickly and avoided outsourcing work wherever possible, as part of a broader focus on building skills in areas in need, he said.

But in Australia, policy had been uncoordinated and the economy is dropping in complexity while the startup sector continues to struggles, he said.

“Our largest customer [China], to whom we sell 40 per cent of out products and services is now choosing to buy its coal, barley, seafood, wine, tourism and education from our competitors. Iron-ore, which is said to be of comparable quality to ours will soon be available from Sierra Leone.

“It is reported that our national debt is expected to rise to almost a trillion dollars by 2024/25. We have high energy costs that materially impact the competitiveness of our manufactures. And we have a skills mismatch between the public and private sector after decades of outsourcing.”

He added Australia’s global brand in business culture is “almost non-existent” and Australia’s “place in the world continues to slip”.

According to Mr Liveris, Australia should learn from the countries which had built strong export markets without natural resources, and from resource heavy nations like Canada which are actively diversifying their economies.

To join them, Australia must show some “humility” and urgently reshape its economy by focussing on priority sectors and their ecosystems in a more holistic way built around domestic manufacturing and processing.

“Manufacturing then becomes a capability and modern manufacturing becomes an ecosystem. And, as every engineer will tell you, the ecosystem of manufacturing is from research, to prototyping, to production, to scaling, and selling and designing the prototype for the next product, which then gives you the next research project.

“[The MMI] is an important first step. The recommendations are challenging and require Australia to apply a sharp focus on outcomes and take more informed risks with the money taxpayers commit every year in the name of innovation.”

Mr Liveris said the MMI  is not simply about more spending and provides a “path to progress” for Australian innovation and will lead to more “informed risks” on innovation spend.

He called for the establishment of a MMI board with long term bipartisan support to make the decisions and connect stakeholders.

Mr Liveris said taxpayers already spend up to eight billion dollars each year funding innovation programs and there has been a steady stream of innovation prepared for the government, but initiatives had lacked an overarching strategy and were distributed to widely across federal portfolios.

“This approach delivers way too little. The reports have to end and the effort needs to shift to delivering stronger outcomes. The strategy must become delivery.”

He called for focus to shift to areas like space and critical minerals, saying there is a multibillion dollar opportunity for Australia in refining lithium alone, rather than exporting the raw material. More refinement in Australia would also help lower emissions by using cleaner domestic processes, according to Mr Liveris.

The same approach can apply to agriculture, Mr Liveris said, with food product processed on shore, and eventually a more circular economy developed.

But to achieve it Australia needs to “very ambitious” and address its continued slip in global innovation rankings.

Mr Liveris, who has worked with governments since 2004 said the COVID-19 pandemic created the catalyst to make fundamental change.

It is a rare opportunity for Australian industry – which he estimated is at an Industry 2.0 level – to leapfrog other advanced economies into “Industry 5.0”.