Quantum theory speaks about the ‘observer effect’ – a phenomenon where the act of observation changes what is being observed. The InnovationAus Counterpoint series in partnership with Verizon has revealed a similar principal can be applied to diversity outcomes in the workplace; the very act of observing the data can improve representation.

According to publicly available data, as seen in this Counterpoint infographic, policy and structural shifts can turbo charge change. Practicing transparency around pay structures as seen in both the public and private sector over time has worked to close the wage gap for women. 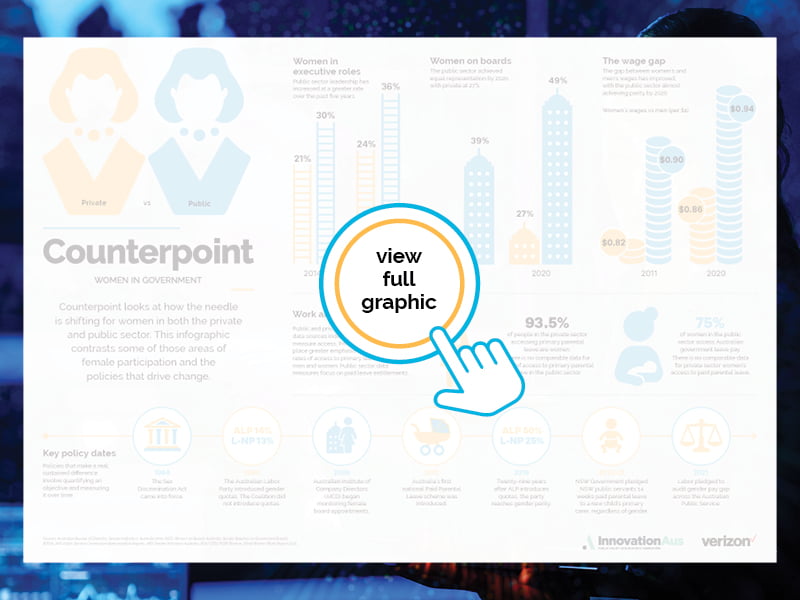 Other, less obvious policies such as making longer and more diverse shortlists for job candidacy can also benefit, as does having women mentor male reports.

That said, if we desire workplace equity, one of the biggest focuses needs to be on improving workplace flexibility. However, comparison data on access to parental leave, whether it was paid or unpaid, is difficult to find and remains.

According to the Counterpoint infographic, the private sector focuses more on showing the different rates that men and women access primary parental leave. Overwhemingly, this is taken at greatest rates by women in non-managerial positions across private sector enterprises.

While we cannot make direct comparisons on workplace support or flexibility, we can see from anecdotal evidence that the 2020s have illustrated in sharp focus how disparate the work-life balance remains.

Precarity of employment through the pandemic, coupled with fulltime childcare responsibilities produced by day care and school closures, have pushed a lot of families to the edge of their sanity, their bank balances and fuelled a spike in marital breakdowns and divorce rates.

It is a period that has emphasised pre-existing inequities in many households, both when it comes to the burdens of housework and home schooling, and in terms of differing financial independence and stability.

Women not only continue to be paid less than men doing the exact same jobs but are also more likely to hold part-time or casual positions and work in industries disproportionately affected by COVID lockdowns.

This has also served to underline how important flexible work conditions are for modern families looking to balance different family structures, commitments, and careers.

The Public Services Association this year released an in depth look at the attitudes and gaps in working lives of its women employed in the public sector.

The What Women Want report points out that employment equity on the basis of a modified traditionally male model of work to incorporate women has largely failed.

Instead of trying to shoehorn modern workers into a 9-5 ‘breadwinner’ based model of employment, Australian women desire a meaningful revision of what we think of as an “ideal worker”.

Disillusionment with this traditional model of work from all sides has been credited with the pandemic-related phenomenon referred to as the Great Resignation or the Big Quit: workers voluntarily leaving jobs that fail to deliver the kinds of employment conditions they want and need.

The desire to redefine ideal performance is in fact a common refrain from employees of all genders and across the private sector as well. Research shows that men also desire greater flexibility and access to family and domestic life.

However, statistics from the Workplace Gender Equality Agency show that while 70 percent of workplaces have formal policies in place to support flexible working arrangements for their workers, “less than 2 per cent have set targets for men’s engagement in flexible work”.

The rigidity of the traditional “ideal worker” model around male employment is bad for men who want more flexibility, reinforces the traditional ‘main breadwinner’ model of ideal employment – which disadvantages those (particularly women) who choose more flexible employment arrangements – and results in a continued ipso facto assumption that women will be the ones to take on the majority of domestic and caring responsibilities.

It is a vicious cycle.

Accessory to the more general discussion about flexibility and family life is the continued policy challenge around equal access to paid parental leave.

In March of this year, the NSW government promised to offer 14-weeks of paid parental leave to all new parents, regardless of gender. This new policy replaced the existing standard that offered 14-weeks to mothers, but only one week of paid leave to new fathers.

Research shows that men’s use of parental leave is associated with a more equal distribution of unpaid work in the home, shifts traditional gender norms, reduces discrimination against women in the hiring process, and increases the overall retention and promotion of women in the workplace.

Despite this, male uptake of parental leave schemes in Australia has been slow and arduous. The federal government’s Dad and Partner Pay scheme, which offers two-weeks of secondary carer’s leave paid at minimum wage ($772.55 per week, before tax), is only accessed by 25 per cent to 30 per cent of Australian dads.

And the issue of flexibility is intimately linked to pay equity, which was the second biggest concern amongst women surveyed by the PSA for their report.

If you don’t pay women the same as their male counterparts, when it comes to choosing whose salary to sacrifice to balance out other commitments, people end up squeezed into the gender normative decision. It strips choice away from families.

The What Women Want report suggests the gender wage gap, whilst persistent, has contracted to just 6 cents on the dollar for public sector workers compared to 14 cents in the private sector.

According to the WGEA, the gap is highest in professional, scientific and technology industries, with women still earning roughly 25% less than their male counterparts.

One thing is certain, when investigate more deeply underneath the surface to look at the experience of women in public compared with the private sector, while there have been great gains, in some areas there is still a long way to go.

This article and infographic are part of the Counterpoint: Women in Government series, which is produced by InnovationAus.com in partnership with Verizon Business Group.