Any Australian who has paid the slightest attention to the politics of climate change knows that Prime Minister Scott Morrison’s mantra is ‘technology not taxes.’ With technology playing such an important role, it is worth exploring how much the government has invested.

This week, the Minister for Industry, Energy and Emissions Reduction announced funding to support research and development of ‘ultra low cost solar’ technology. This was a new priority technology included in the Low Emissions Technology Statement (LETS) 2021, in addition to the five included in the previous year’s statement.

The Commonwealth Government released its long-promised Long Term Emissions Reduction Plan on 26 October, just after discussions with the Nationals that enabled the government to announce a commitment to net-zero emissions by 2050.

Despite the importance of the Technology Statement to the Reduction Plan, it was not released until 2 November – a whole week after the plan and under the media cover of the Melbourne Cup. This piecemeal release continued on 12 November when the government announced it was releasing the modelling used in the plan. We will have more on the modelling on another day.

As previously noted here, the plan consists of five pillars of reductions, of which one is reductions already achieved. Three of the other four include the word ‘technology’ in either their title or descriptor.

The plan relies on a 40 per cent reduction from the Technology Investment Roadmap, a further 15 per cent from global technology trends and the final 15 per cent from further technology breakthroughs. At least the Reduction Plan did include the sixth pillar, flagging it as being included in the forthcoming ‘LETS2021.’

So 40 per cent of our emissions reductions are to come from the Technology Investment Roadmap; that in turn seems to encompass the priority technologies included in the LETS, as well as ‘enabling infrastructure’ and yet more ‘emerging technologies.’

Table 2 in the modelling document reveals that McKinsey estimated the emissions reduction from the Technology Investment Roadmap as 37 per cent, while the GTEM used by the department had a range of 17-42 per cent.

What we can be sure of is that the six priority technologies and the government’s stretch targets (to paraphrase Apocalypse Now – don’t you love the sound of consultant-ese in the morning) have to contribute a lot to that 40 per cent.

So all of that is by way of a long introduction to the question – how much is the Australian government investing in its technology priorities? The short answer is ‘not much.’

This week’s announcement was for $40 million of funding from ARENA’s existing budget. To put that in perspective, it is only three times the $12.9M the government spent on the Positive Energy ad campaign (as reported in November).

Maybe we are being a bit unfair. The government clearly is committed to ‘technology not taxes.’ Despite it being a three-word phrase, they tell us it is a strategy, not a slogan.

Indeed, we should have some confidence in the 15 per cent of our emissions reduction targets coming from ‘global technology trends.’

The IEA has published data on public RD&D by IEA countries. This shows strong growth in expenditure and a huge swing away from RD&D on nuclear options. 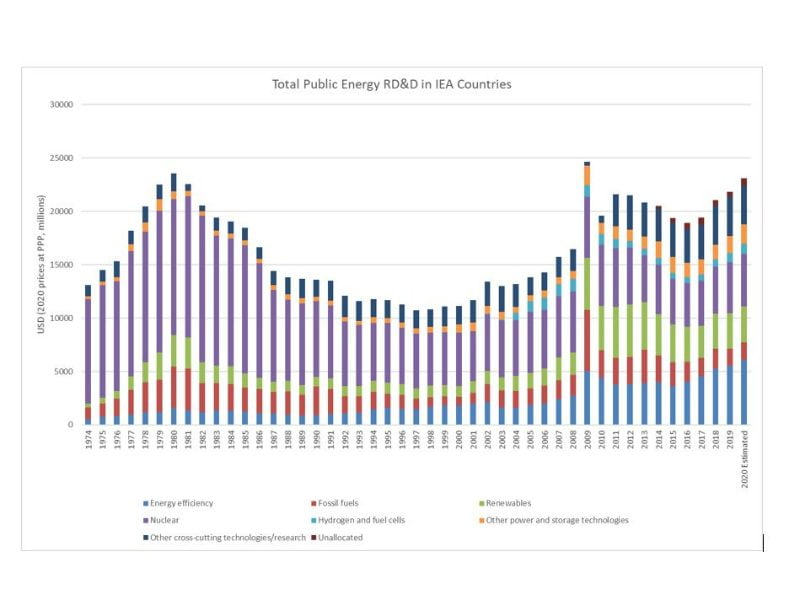 However, the picture is less rosy for Australia, as shown in the chart below (which is denominated in percentage of GDP rather than dollars). 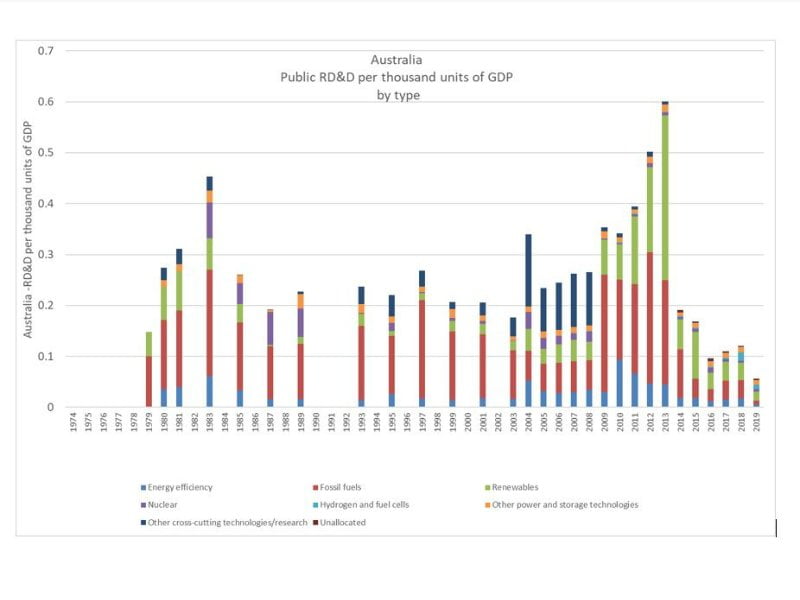 Essentially, public RD&D on energy collapsed after 2013. This is not surprising, given that the Abbott government’s preference was to abolish ARENA and the CEFC.

I find writing this analysis distressing. I really want to believe that the coalition has crossed the Rubicon and is totally committed to a Net Zero by 2050 outcome. But everything feels like an opportunity for a new announcement rather than a coherent plan for delivery.

It appears that Messrs Morrison and Taylor built their plan not on analysis or strategy but only on hope.