In an era where technology and the proliferation of data is creating valuable insights for businesses and consumers to understand the world around them, our visibility of government remains stubbornly opaque.

Certainly, there is a role for the application of technology and data analytics to better understand patterns of behaviour and to more quickly identify where problems exist. But the promise of technology has fallen well short in relation to government.

In fact, the danger is that uncertain data governance and the application of black-box algorithms is making visibility in government decision-making more opaque.

InnovationAus.com will host a special Transparency in Government webinar on Tuesday March 30 from 1pm to 2pm that will look at the opportunities presented by data analytic technology, the challenges of its use in public view, and the political realities that act as a handbrake on its use.

Hosted by InnovationAus publisher Corrie McLeod, our discussion guests are former AFP officer Carrick Ryan, who spent years on the NSW Joint Counter Terrorism team and is now an active political commentator; the outspoken former chief of the NDIS Technology Authority Marie Johnson, who is now chief executive of the Canberra-based Centre for Digital Business; and Han Aulby, the executive director at Centre for Public Integrity, an outspoken advocate on transparency issues in government.

You can register for this public event here.

Governments share data across agencies and departments to determine how to improve citizen outcomes in the delivery of services, or in identifying fraudulent or criminal activity, and to disrupt potential national security threats to our society.

But we have not seen the same amount of ‘data intelligence’ applied in the operation of the public sector – both in executive government and the bureaucracy that implements its policies.

Pork-barrelling scandals, an exploding number of unaddressed FOI requests, higher than ever management consultancy fees, and the lack of availability of real-time data on corporate donations to political parties with a federal election due in the next year.

Australia has a well-regarded government. Its relative success in responding to crises like the global financial crisis and COVID-19 is evidence it can perform.

But like all organisations, the new era of data has made it harder, not easier, for an interested public to clearly understand government transactions and communications.

Areas for discussion include: 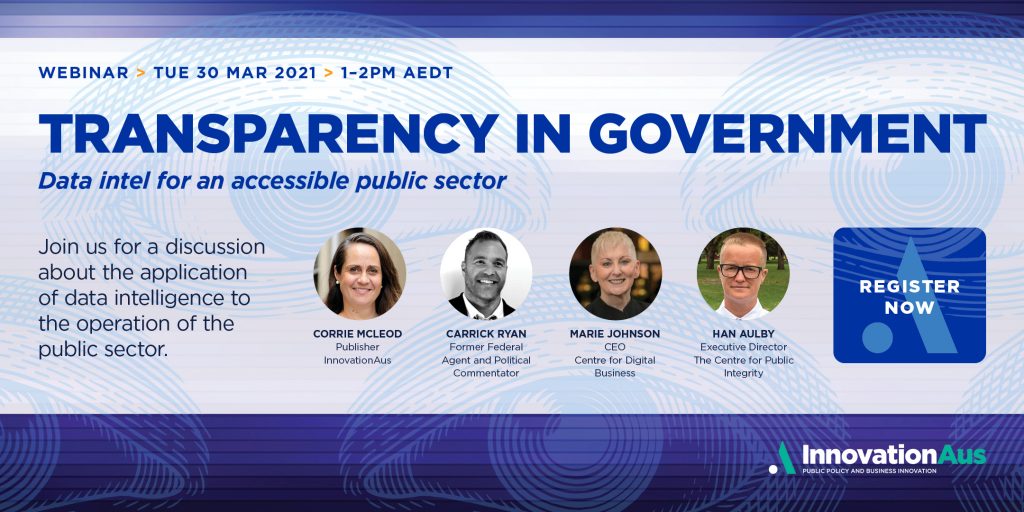 Transparency in Government is an InnovationAus.com public interest webinar. The event is open. You can register to attend here.