The US, UK and Australia have struck a new defence alliance, dubbed AUKUS, and will construct a fleet of nuclear powered submarines in Adelaide.

The submarines will be nuclear powered, but not carry nuclear weapons, according to Prime Minister Scott Morrison, and there will be no civil nuclear industry established locally. 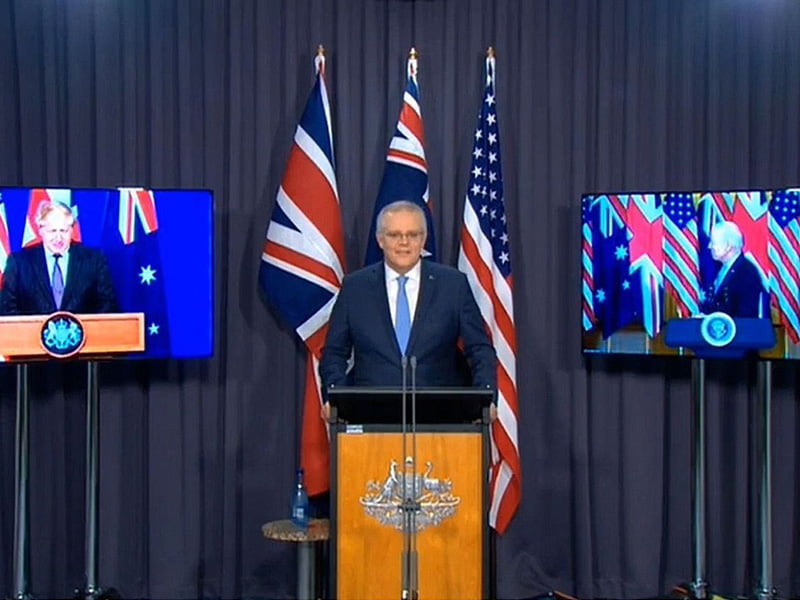 It is not clear when the first vessels will be constructed, nor how many will be built or how much they will cost.

These questions will be examined in an 18-month “intense examination of what we need to do to exercise our nuclear stewardship responsibilities here in Australia”, according to the PM.

“We intend to build these submarines in Adelaide, Australia, in close cooperation with the United Kingdom and the United States,” the Prime Minister said.

The deal is a clear response to China’s rising defence posture in the region and has profound implications for Australia’s trade relationship with China – already at breaking point and the subject of punitive action by China.

The surprise announcement from the leaders of the three countries also has massive industrial implications for the country, not least the training of new experts and technicians in nuclear propulsion.

The South Australian government has established centres for these technologies at the Lot 14 technology precinct in the CBD of Adelaide, alongside the headquarters of the Australian Space Agency.

The deal also means that French Naval Group, which is establishing a submarine building capability in the South Australian capital, will be dumped – paid off with a reported break fee of $400 million.

The construction of a new submarine shipyard — alongside ASC, the former Australian Submarine Corporation and BAE Systems Maritime’s surface warship construction yard at Osborne near Port Adelaide — will also continue.

The decision cements Adelaide’s position as the centre for large-ship naval construction in Australia, with Perth filling the role of constructing less complex, smaller patrol boats.

An Australian submarine is likely to resemble an attack submarine or hunter-killer submarine used by the US and UK.

One such submarine is the HMS Conqueror, which controversially sank an ageing Argentinian battleship, the Belgrano, during the Falkland’s war.

However, the move continues a run of stop-start decision-making from Canberra on the future of the submarine force to replace the Collins-class, which were constructed in Adelaide.

Labor when in power was widely seen as delaying making a submarine choice, with the Liberals first favouring a Japanese, then French choice, only to be replaced by the latest deal with the US and the UK.