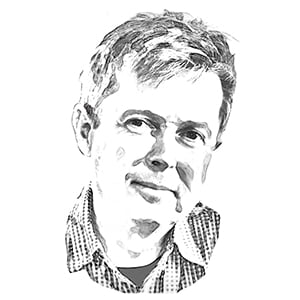 The venture funding of emerging industry clusters are currently disconnected from Australian industry development policy. To fully fund a specialist emerging industry, one needs a highly liquid deep tech venture industry, which when modelled is three times the current size.

While we do have the beginnings of specialist venture funds, this paper proposes to expand the targeted introduction of Industry Venture Funds. 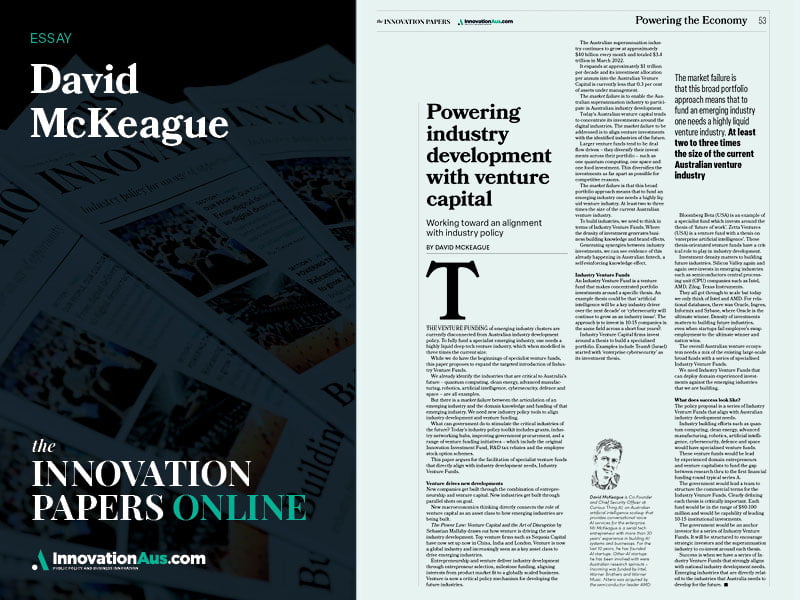 But there is a market failure between the articulation of an emerging industry and the domain knowledge and funding of that emerging industry. We need new industry policy tools to align industry development and venture funding.

What can government do to stimulate the critical industries of the future? Today’s industry policy toolkit includes grants, industry networking hubs, improving government procurement, and a range of venture funding initiatives – which include the original Innovation Investment Fund, R&D tax rebates and the employee stock option schemes.

This paper argues for the facilitation of specialist venture funds that directly align with industry development needs, Industry Venture Funds.

New macroeconomics thinking directly connects the role of venture capital as an asset class to how emerging industries are being built.

The Power Law: Venture Capital and the Art of Disruption by Sebastian Mallaby draws out how venture is driving the new industry development. Top venture firms such as Sequoia Capital have now set up now in China, India and London. Venture is now a global industry and increasingly seen as a key asset class to drive emerging industries.

The Australian superannuation industry continues to grow at approximately $40 billion every month and totalled $3.4 trillion in March 2022.

It expands at approximately $1 trillion per decade and its investment allocation per annum into the Australian Venture Capital is currently less that 0.3 per cent of assets under management.

The market failure is to enable the Australian superannuation industry to participate in Australian industry development.

Today’s Australian venture capital tends to concentrate its investments around the digital industries. The market failure to be addressed is to align venture investments with the identified industries of the future.

Larger venture funds tend to be deal flow driven – they diversify their investments across their portfolio – such as one quantum computing, one space and one food investment. This diversifies the investments as far apart as possible for competitive reasons.

The market failure is that this broad portfolio approach means that to fund an emerging industry one needs a highly liquid venture industry. At least two to three times the size of the current Australian venture industry.

To build industries, we need to think in terms of Industry Venture Funds. Where the density of investment generates business building knowledge and brand effects.

Generating synergies between industry investments, we can see evidence of this already happening in Australian fintech, a self-reinforcing knowledge effect.

An Industry Venture Fund is a venture fund that makes concentrated portfolio investments around a specific thesis. An example thesis could be that ‘artificial intelligence will be a key industry driver over the next decade’ or ‘cybersecurity will continue to grow as an industry issue’. The approach is to invest in 10-15 companies in the same field across a short four years?.

Industry Venture Capital firms invest around a thesis to build a specialised portfolio. Examples include Team8 (Israel) started with ‘enterprise cybersecurity’ as its investment thesis.

Bloomberg Beta (USA) is an example of a specialist fund which invests around the thesis of ‘future of work’. Zetta Ventures (USA) is a venture fund with a thesis on ‘enterprise artificial intelligence’. These thesis-orientated venture funds have a critical role to play in industry development.

They all got through to scale but today we only think of Intel and AMD. For relational databases, there was Oracle, Ingres, Informix and Sybase, where Oracle is the ultimate winner. Density of investments matters to building future industries, even when startups fail employee’s swap employment to the ultimate winner and nation wins.

The overall Australian venture ecosystem needs a mix of the existing large-scale broad funds with a series of specialised Industry Venture Funds.

We need Industry Venture Funds that can deploy domain experienced investments against the emerging industries that we are building.

The policy proposal is a series of Industry Venture Funds that align with Australian industry development needs.

These venture funds would be lead by experienced domain entrepreneurs and venture capitalists to fund the gap between research thru to the first financial funding round typical series A.

The government would lead a team to structure the commercial terms for the Industry Venture Funds. Clearly defining each thesis is critically important. Each fund would be in the range of $80-100 million and would be capability of leading 10-15 institutional investments.

The government would be an anchor investor for a series of Industry Venture Funds. It will be structured to encourage strategic investors and the superannuation industry to co-invest around each thesis.

Success is when we have a series of Industry Venture Funds that strongly aligns with national industry development needs. Emerging industries that are directly related to the industries that Australia needs to develop for the future.

David McKeague is Co-Founder and Chief Security Officer at Curious Thing AI, an Australian artificial intelligence scaleup that provides conversational voice AI services for the enterprise.  Mr McKeague is a serial tech entrepreneur with more than 30 years’ experience in building AI systems and businesses. For the last 10 years, he has founded AI startups. Other AI startups he has been involved with were Australian research spinouts – Incoming was funded by Intel, Warner Brothers and Warner Music. Nitero was acquired by the semiconductor leader AMD.

Toward the next generation of digital entrepreneurs