Wajarri Yamaji Country is a magical place. For tens of thousands of years its people have stood on and cared for Country.

I’ve just been there to help break ground for the Square Kilometre Array (SKA) Observatory’s SKA-Low, a telescope comprising 131, 072 Christmas tree-shaped antennae and so powerful that it will promise to look back in time and tell us how we got here.

Planning and preparation for the first mega-science project in Australia started during the surge of post-Cold War globalisation in the 1990s and concludes amid fires, floods, pandemic, an IPCC climate “code red” and deteriorating geopolitics in the 2020s. It’s a firm punctuation mark that gives pause to ask; what is the point of landmark research infrastructure in times of near-existential uncertainty?

The first and most obvious answer is that landmark research infrastructure, in the case of the SKA, expands our understanding of the Universe and drives technology to the very edge of what’s achievable. But there is a more subtle point here. Research infrastructure is a time machine, it lets us look into the future. 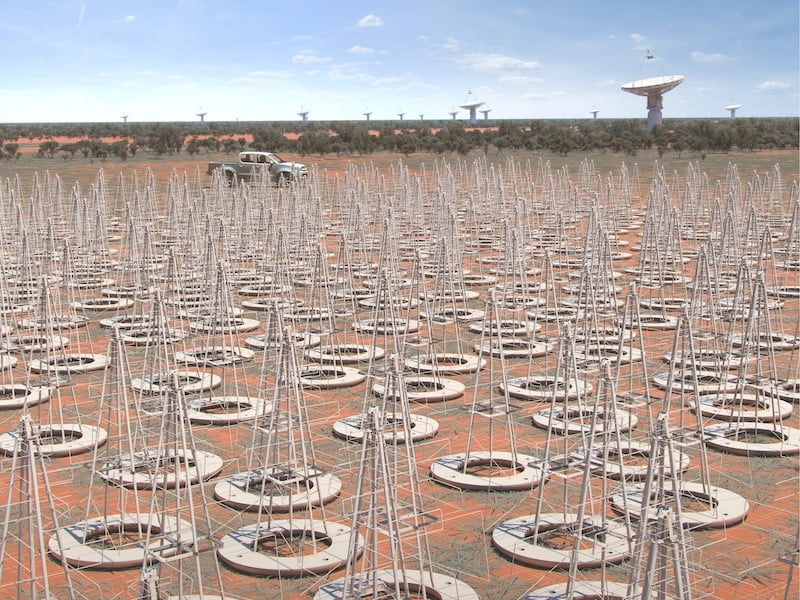 Infrastructure isn’t just roads, bridges, optical fibres or telescopes. It’s the networks over which value — goods, power, waste, data, insights and trust  — is exchanged. If you want to know what will be valuable in the future, look to research infrastructure now. Only don’t look at the infrastructure itself, look at who’s using it and what they are exchanging.

For example, by the 1980s, universities and other research organisations like CSIRO had custom-built their own research data networks to do things like data visualisation, data transfer and high-performance compute. It was revolutionary. There are stories of some people having desks with eight computers on them so they could get done what they needed across multiple networks. Data was being exchanged, but it was high friction.

By 1989, a coalition of all the Australian universities and CSIRO formed AARNet and brought the internet to Australia via a NASA subsidised satellite link.

In typical Aussie fashion, two blokes bought about 50 routers, jumped in a car and drove around the country for six weeks in 1990 and built AARNet for the princely sum of $1.77m. Traffic on that network doubled every eight months for years, other Australians wanted to jump onboard, internet service providers proliferated and that – as they say – is history.

What was being traded on those networks in 1985? Data. By whom? Almost anyone who could get their hands on it. What rules our lives these days? Data.

Let’s roll back further in time to the radio telescopes of the 1960s. Electronics engineers were trading insights about how to find, process and move around very weak radio-wave signals. Those insights now underpin the satellite and mobile telecommunications technology that pushes data around the globe; WiFi.

Fast forward to the 1990s and early 2000s and we saw the Human Genome Project, still the world’s largest collaborative biological project. The insights traded on that infrastructure have underpinned the entire field of genomics which is powering some of the most exciting developments in our world today, ranging from the promise of personalised medicine to infinite recycling of plastic.

Let’s return briefly to radio astronomy for a peek into that part of our future.

Extreme-scale research like the SKA and its precursor, CSIRO’s Australian SKA Pathfinder, don’t function without supercomputers. Supercomputers are notoriously hungry, consuming lots of power and water. That’s problematic at a time when the world seeks to transition to a decarbonised and sustainable future.

And yet Setonix — the new system at Perth’s Pawsey Supercomputing Research Centre — has found a path through. Setonix ranks as the 15th most powerful computer in the world, and fourth on the sustainability list. The astronomy community is, right now, trading insights on how to ingest, process, analyse and extract insights from vast amounts of data in a more sustainable way.

The observatory in remote Western Australia was recently gifted the name Inyarrimanha Ilgari Bundara by the Wajarri Yamaji, the Traditional Owners and native title holders of the site. It means ‘sharing sky and stars’ in Wajarri, reflecting the deep connection to sky and Country held by the Wajarri Yamaji.

It is also a reminder that Australia is home to the world’s oldest continuous living culture, to which we look as we make our way into the future together. The name represents the Wajarri Yamaji generosity in reminding us that research infrastructure has a convening power.

I hope you will join me in thanking them for sharing their sky and stars with the global astronomy community by hosting these world-leading radio telescopes on Country; and for the opportunity to peek into our future.

Professor Elanor Huntington is the Executive Director for Digital, National Facilities and Collections at the CSIRO, and is a director on the boards of the Australian Academy of Technology and Engineering; AARNET; and the Pawsey Supercomputing Centre. You can follow her on Twitter @profelanor