With the Government releasing the University Research Commercialisation (URC) Action Plan, it is worth looking at the relationship between research and the development of new industries. The case study we will choose is the photovoltaic solar panel.

Edmond Becquerel, in 1839, discovered that light could make electricity. He found that a simple battery – two electrodes in a conductive solution – made more electricity when exposed to light (the photovoltaic effect). In 1876 William Grylls Adams and Richard Evans Day discovered that selenium produces electricity when exposed to light. Charles Fritts, an American inventor, described the first solar cells made from selenium wafers in 1883, which had a 1 per cent efficiency.

In hindsight, Harry Messel may appear to have been foolish writing in 1953 that “utilisation of solar energy is not as easy as many people have been lead to believe and is not likely to play a major role in supplying power for many hundreds of years.” His forecast may have been different had he waited just one more year.

The tremendous breakthrough came in 1954, when researchers at Bell Labs, which Jon Gertner dubbed The Idea Factory, developed the silicon photovoltaic cell. As the New York Times declared on its front page of 26 April 1954, Vast Power of the Sun is Tapped By Battery Using Sand Ingredient. Scientists claimed efficiency of 6 per cent conversion of the energy of sunlight to electricity, six times better than other devices.

The New York Times article declared, “A solar battery, the first of its kind, which converts useful amounts of the sun’s radiation directly and efficiently into electricity, has been constructed here by the Bell Telephone Laboratories.” It went on to state that the construction of the first solar module to generate useful amounts of power marks “the beginning of a new era, leading eventually to the realisation of one of mankind’s most cherished dreams—the harnessing of the almost limitless energy of the sun for the uses of civilisation.”

While the news of the silicon photovoltaic cell received much more attention than the earlier announcement of the transistor, the first practical use in telecommunications revealed the cost of the solar cells made them technically brilliant but impractical. After that, however, the cells found use in spacecraft – as have a much lesser-known kind of generator referenced in the NY Times story – the RCA atomic battery.

As is largely well-known, an Australian researcher who was a seven-year-old boy in Brisbane when Messell wrote his words changed the face of PV cells. UNSW Professor Martin Green has been described as the ‘father of solar‘ and the ‘father of photovoltaics‘. Green invented the passivated emitter and rear contact (PERC) cell in 1983, and by 1989 had achieved 25 per cent efficiency. Before that, efficiency had been static at 17 per cent for quite some time.

PERC cells are variously estimated to represent 50 per cent to 90 per cent of world production. Inquiries to UNSW haven’t resulted in a direct answer on what the patents on these inventions have contributed to University funding. But they did indicate that the patents had expired by the time the technology was taken up at scale. However, UNSW does benefit from licence and royalties from several related technologies – the early PERC patents were just the beginning. These include patents on materials improvements using ‘hydrogenation’ techniques, patterning and contacting technologies.

Green and his team have continued to break records for research-cell efficiency, currently 40.6 per cent which is about twice the commercial rate. In November last year, he told an interviewer that in recent years, it’s become more difficult to compete with the kinds of resources that commercial manufacturers can dedicate to improving solar-cell efficiency.

“It’s at a completely different scale now,” Green told The Brilliant. “Manufacturers can employ 100 people in their research team, and they’re pumping out thousands of research cells a day. Doing this is really important to them. It’s their bread and butter. They need to keep ahead of their competitors.”

Although solar cell manufacturing occurs in China, and cell development has moved to commercial labs, Australia has benefitted massively from the work of Green and his colleagues. His work is the main reason why the New York Times’s early promise is finally being fulfilled. But like most research, it achieves this outcome as a public good rather than a private benefit.

This story punctures the model that the average policymaker has of some breakthrough technology rapidly resulting in a product that is then ‘manufactured.’ A different Professor Green (Roy) has already told the Commonwealth that the linear lab-to-market model needs to be replaced by a focus on ecosystems. The extent of the ecosystem in solar cell development can be seen in the chart of research-cell efficiencies is updated every six months by the US National Renewable Energy Laboratory (NREL). 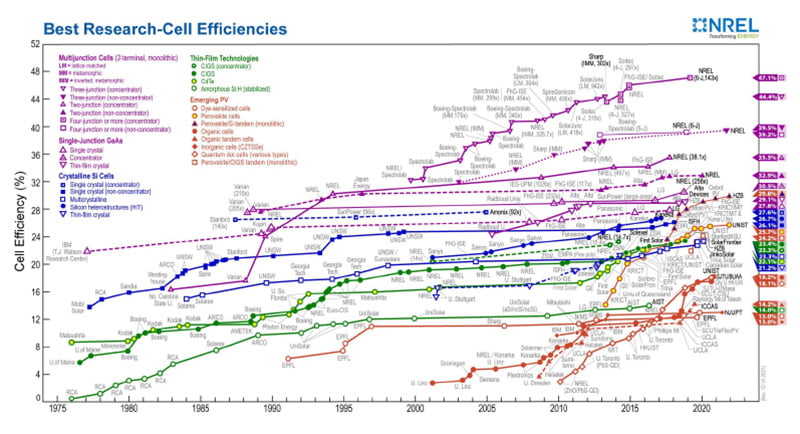 Undoubtedly, the folk at BCG and Deloitte who got paid taxpayer dollars to tell the Government what it wanted to hear had a different view. But, unfortunately, we will never know because confidentiality provisions cover all the contracts the Government lets with the big consulting firms at the insistence of the consultants. It is hard to decide whether confidentiality is there to protect the consultancies from the criticisms that their work would receive if made public, or because the consultants need to keep it confidential because they sell the same advice multiple times but charge for it as if it was unique each time.

The value of commercialised research is much more significant in the technical, societal or economic challenges that are solved than in the new business opportunities they might create. Even the other supposedly great Aussie tech invention – WiFi – doesn’t fit the linear model. Yes, the CSIRO eventually scraped back some value as a patent troll, but the economic benefit to Australia has been far more significant from the connectivity that WiFi enabled.

The reliance on the linear model of research commercialisation is only one of the flaws in the Government’s model. It is, however, a huge flaw and acting on it threatens to destroy the research capability of our Universities.

Footnote: In modern parlance, we tend to think of batteries as rechargeable, whereas the meaning from 1801 was only a chemical means of generating electricity. The idea of rechargeable batteries did technically come earlier, referring to a series of Leyden jars that could recharge or discharge simultaneously. In this usage, ‘battery’ was adapted from its meaning as a combination of simple instruments, and the Leyden jar is technically a capacitor.