Four out of five individuals that participated in the InnovationAus.com 2022 Government Procurement Survey believe the process of selling technology to the federal government remains complex, difficult and slow.

Most respondents also consider the process of preparing and submitting bids to government arduous, despite efforts over several years to make the process of winning government work easier for small and medium-sized enterprises (SMEs).

The findings are based on responses to an online survey conducted by InnovationAus.com between September 13 and October 7 that asked SMEs to detail their experiences selling to government to inform any future review of procurement policy.

The damning assessment makes for fascinating reading, with most respondents lamenting the experience, particularly the close relationship between government, tech giants and the Big Four consulting firms, which has only firmed during the pandemic.

Those interested in viewing the anonymised survey results – which were circulated with respondents and policy makers ahead of publication – can download a PDF copy of the report here. 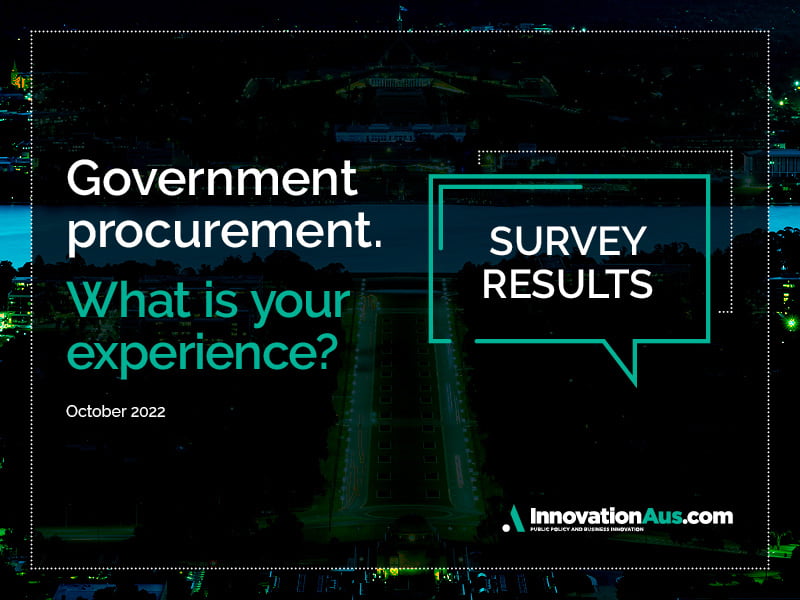 Of the respondents to the survey, more than 90 per cent work in SMEs. 64 per cent have either one to five employees (29 per cent) or five to 25 employees (35 per cent), while seven per cent were from organisations with more than 250 employees.

The survey found the process of selling to government is largely “complex, difficult and slow”, with 78 per cent of respondents agreeing with the statement. Not a single respondent said the process was “simple, easy and fast”.

Almost 50 per cent described the experience of selling products and services to government as either negative (26 per cent) or very negative (23 per cent). Only 21 per cent had had a positive experience.

Most respondents also found the process of preparing and submitting bids required “too much effort” (67 per cent) and that requests for tender/requests for information are “rarely” suitable for SMEs to bid on (43 per cent).

Some respondents put this down, at least partially, to the government’s reliance on consultants and contractors, which has grown considerably in recent years, and the degradation of the Australian Public Service.

“The capabilities of government are contracted, usually to one of the Big Four consulting firms, who are also bidding for the contract in competition to us,” one respondent wrote.

“As the government do not have the internal resources to evaluate on merit, they will often take the low risk (high cost) international firm in partnership with a tier one consulting firm.

“This is at an extremely high premium – however, due to [the] lack of internal competency to evaluate on merit, they are often left with no choice. (No one gets fired for buying SAP).”

Other respondents said that “very few executives seem to have time for Australian SMEs”, with some pointing to a want by the government to avoid mistakes (“No one ever got fired for hiring IBM”).

Some individuals said panels are only used to “legitimise procurement from the big companies who can afford the presales lunches”, while others simply said there is “no will with politicians or empire building bureaucrats” to improve services, platforms and applications and save billions.

“In my experience, government have already made up their mind about who they want to win a bid,” one respondent said.

“The tendering process is often a façade. The opportunity cost of wasting time on façade tenders is huge… Façade tenders exist in a lemon market where government don’t know how to measure value.”

Survey responses recommended a number of improvements, including a new procurement mechanism whether government agencies can engage with startups and SMEs for projects valued up to $1 million.

Approaching procurement as “an opportunity to investigate and invest in Australian industry capability”, more appetite for risk, greater use of hackathons for sourcing ideas, and consolidation of procurement channels were also flagged by respondents.