The dollar value in government contracts awarded to Boston Consulting Group and McKinsey doubled in 2020, with both large US management consultant firms enjoying a sharp increase in federal work during the pandemic.

The value of contracts awarded to Boston Consulting Group (BCG) increased by 105 per cent year-on-year in 2020, rising from a total spend in 2019 of $15.1 million to $31 million last year, according to an InnovationAus investigation.

The total value of contracts held by BCG that were either awarded last year or that were still active during 2020 was $60.3 million. This included an increase of more than 200 per cent in the dollar value of contracts awarded to BCG by the Industry department for work specifically related to the pandemic or Australia’s economic recovery from it. 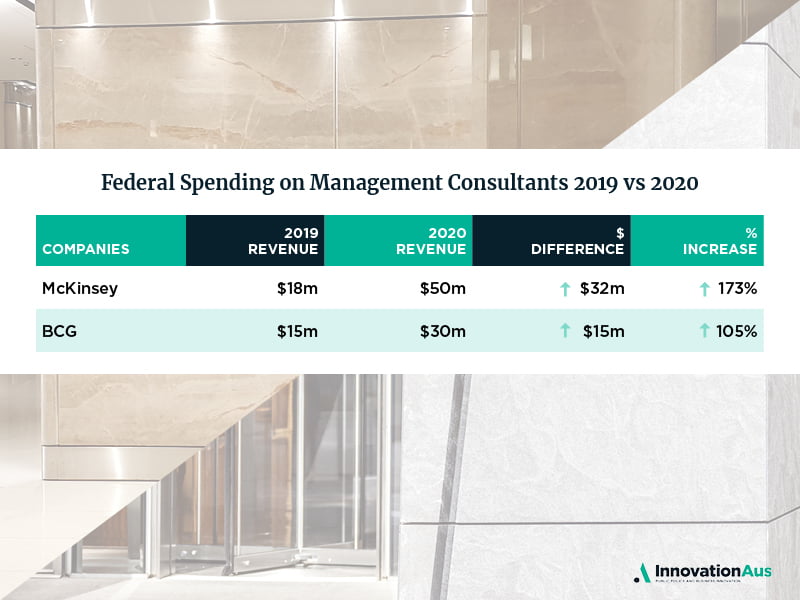 For fellow American management consultancy McKinsey, the value of government contracts jumped by 173 per cent, or nearly tripled. The total spend in 2019 on McKinsey work for the government was $18.5 million, which soared to $50.6 million in 2020.

This included a more than 1000 per cent increase in work from the Digital Transformation Agency across a range of projects.

To calculate these figures, InnovationAus analysed all contracts active in those years as posted to tenders.gov.au, to compare 2019 to the pandemic year of 2020. The reporting structure involves the reporting of any contract that is active in that period.

For the yearly spend, InnovationAus measured the length of each contract, calculated the daily expenditure for that work, and multiplied that figure by the number of days each contract was active during the periods being investigated.

Last year was shaped by the ongoing COVID-19 pandemic, with the focus and spending of the government focusing on the health crisis. There was an increased reliance on outsourcing and private consultants across a range of departments and projects.

The InnovationAus analysis revealed that BCG’s growth largely stemmed from increased demand for the company’s services from the Department of Industry, Science, Energy and Resources and from the Digital Transformation Agency (DTA), both key departments and agencies during the COVID-19 response.

The DTA did not award any contracts to BCG in 2019, but handed the firm $2.232 million during 2020 across a range of projects, including the development of the much-maligned COVIDSafe contact tracing app.

BCG earned $1 million for its work on COVIDSafe, providing an advisory role in the early phase of its development. The firm was also contracted for whole-of-government ICT policy and governance and a funding options analysis worth $875,000.

BCG’s work with the Industry department jumped sharply by 234 per cent in 2020 compared with the previous year, from $684,000 to $2.2 million during the pandemic.

These contracts included a first pass report on the supply chain resilience initiative, worth $330,000 for one months’ work, and a new $5.5 million contract for “model delivery, consultancy services and reports” for the industry department.

The firm was also awarded an $80,000 contract to provide advice on integrating gas modelling for the department, a key facet of the government’s COVID-19 economic recovery plan.

McKinsey’s increase in government contracts came largely from Services Australia and the DTA.

McKinsey won a $1 million contract in May last year to develop a business case for a revamped version of the myGov platform which Deloitte is building. It also was awarded $1 million to work on a new visa processing platform.

Services Australia now accounts for 45 per cent of McKinsey’s government work, while the DTA accounts for 3 per cent.

McKinsey’s three contracts with Services Australia in 2020 were all for “business advisory services”, with one of these contracts worth $8.6 million over eight months.

The public sector union last week raised concerns that Services Australia had been “run down” by a reliance on outsourcing and private contractors which has led to “substandard” IT delivery.

“Services Australia has lost sights of the benefits of in-house ICT development. A lack of career paths for ICT professionals and the government’s bargaining approach have impacted the agency’s ability to attract and retain ICT talent,” the Community and Public Sector Union (CPSU) said in a submission to government.

“The CPSU has been vocal about the phenomenal increase in consultancy expenditure both in Services Australia, and the APS more broadly in the past five years.”