A year really is a long time in the world of government. On July 30th 2019 we released our book ‘Are we there yet? The Digital Transformation of Government and the Public Service in Australia’ optimistic that our call to action for digital transformation to drive better citizen services and better government for the sake of Australia’s future would be heeded.

Fast forward a year and – despite the suffering of drought, bushfires and the global pandemic – we’re still optimistic. Indeed the response to COVID-19 and now the rebuilding of our economy is driving the adoption of many of the ideas, tools and techniques outlined in our book.

In a two-part series Martin Stewart-Weeks and Simon Cooper outline their optimism for digital transformation in government and what should come next.

The National Cabinet and now the enshrined Australian Digital and Data Council of Ministers have led the way in embracing digital solutions to support and meet the growing expectations of our communities.

Digital channels have been enhanced and refreshed to provide us information when we have needed it most, including the new Australia.gov.au, hazard apps like FiresNearMe and even the COVID-19 WhatsApp channel developed and launched in just six days.

Digital products have been rapidly stood up and enhanced, defying the usual months of deliberation to meet the rising immediacy of citizen needs. Recent examples include the bushfire response business grants by ServiceNSW, the JobKeeper program, the COVIDSafe App and COVID-19 Safe Checklists as well as Telehealth consults, removal of paper forms, contactless payments, remote schooling and new contact centres – all of testament to the uplift in the release of rapid digitised services.

Underneath it all, there are early signs that sheer necessity is finally birthing a mindset of collaboration and a “trial, test and adjust” approach that doesn’t try to nail every last detail down before launching prototypes to learn how to make them work even better.

This should provide the confidence to public servants that digital can be done and (generally) done well at speed, ideally with a focus on shared solutions and assets.

The work of now, not the future

COVID-19 has been a big and largely digital shock to the system, and for the moment at least, and it seems for the moment at least, flexible, agile, remote and digital” have become the new and necessary ways of working norms for Government and the public sector. We’ve worked out that digital tools and their associated culture of connect and collaborate are no longer just for the IT department.

Under the intense conditions of a major pandemic, the changing nature of work is no longer a future prospect but a very present reality, elements of which were already in place or emerging before the future rudely kicked down the front door.

Why would we want governments to go back? Is it possible to capture the best of the changes and new ways of working and entrench them as a new and welcome normal?

One senior officer in the NSW Government told us “COVID-19 has helped us accelerate digital transformation and overnight removed the residual change fatigue and resistance … suddenly everyone is onboard in a way we could only of dreamed about. Zoom calls are the tip of the iceberg.”

If replicated elsewhere the removal of such resistance is the very definition of a silver living from this period.

Quite possibly we have never seen quite so many public servants and others they work with pouring over charts and graphs of integrated and better presented data.

The relentless information gathered and analysed by government data scientists (such as in the NSW Data Analytics Centre) from across government and the private sector has increasingly provided citizens up to date information on infection rates, the economic impacts and when best to travel on public transport.

Those who advocated for such assets like the Hon Victor Dominello were more than vindicated with such investments, especially as other countries without such capabilities have visibility struggled.

Just as importantly, at a time when human empathy and a sense of care and compassion have never been more important, we’re realising that the promise of “citizens at the centre” or “people centred services” don’t need to be afterthoughts or glib of cruel clichés.

We are starting to see digital infrastructure being spoken about as national assets in the same way politicians talk about infrastructure such as roads and airports.

The most notable is the NSW Government’s landmark $1.6 billion investment over three years in government digital infrastructure as part of the state’s post-COVID economic stimulus funding and includes boosting cyber security capability.

Such investment includes specific funding for proofs of concept and demonstrating what problems are being solved for moving away from a like-for-like digitisation approach and ending the days of multi-million-dollar IT programs that overrun and don’t (always) deliver value for citizens.

It will also ensure regional connectivity upgrades to help those whose remote and flexible working arrangements have too often been cruelled by poor and unreliable connections and limited access to data.

Investment has also been out of pure necessity. When such infrastructure doesn’t work, it’s highly visible and increasingly impacts on our economy. And when it comes to cyber that is very much part of our national security strategy. The threat of state based actors and organised crime are ever increasing, with the Federal Government announcing record investment to counter these.

Digital transformation, for us and for more and more of those working in and with government, is a way of seeing and rethinking the entire business of governing, government, and the work of the public service to better serve citizens and customers in a democratic society and across all levels of government.

This requires the task of reskilling the public service and partners who work with them and is now well underway.

Such skills are not mere nice to haves and are far removed from the previous narrative of ‘teaching everyone to code’. The economic recovery will be fuelled by public servants who are skilled in customer centricity, collaboration and agility, data, ethical decision making, understanding technology, digital leadership and basic issues like access to tools and connectivity.

Looking forward, not back

If we do both policy and government reform well, fuelled by digital, we will see rising citizen and business confidence that translates into recovery, investment and jobs enabled by a world class public service. With 30% of the economy tied to government, its transformation will be vital to Australia recovering and coming back stronger. 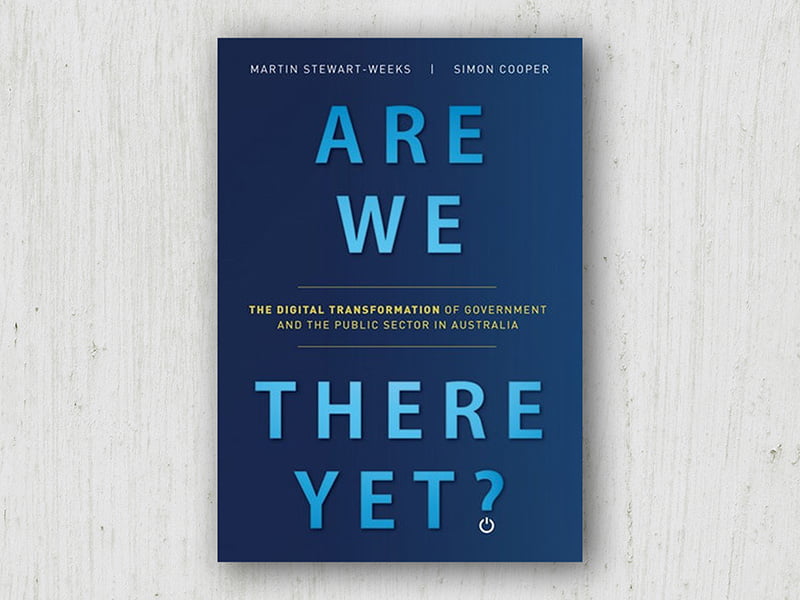 Martin Stewart-Weeks is a former public servant and Ministerial chief of staff and now an independent advisor working at the intersection of policy, public sector management, innovation and technology. He ran a strategy and innovation group for Cisco’s public sector practice in Asia-Pacific and chaired the digital government advisory panel for the NSW Government. He co-authored the book ‘Are we there yet? The Digital Transformation of government and the public service in Australia’ (2019)

Simon Cooper leads on digital transformation in government for Deloitte in NSW. He has worked with 45+ government agencies around the world as a Consultant and as a Public Servant. He co-authored the book ‘Are we there yet? The Digital Transformation of government and the public service in Australia’ (2019) www.arewethereyetdigital.com