The University Research Commercialisation Action Plan has been developed by the Department of Education, Skills and Employment. However, in a case of ‘if all you have is a hammer, everything looks like a nail’, the action plan fails to address the whole issue.

The University Research Commercialisation Action Plan is a policy that starts from flawed premises. The first is the fallacy of the linear model. The second fallacy is to regard this as a problem with how to run our University sector.

An example of this second fallacy is the Australian Chamber of Commerce and Industry submission quoted in the URC Action Plan. They place the blame for lack of industry-university collaboration on academic staff, writing:

“Currently the reward system inside universities is not set up for commercialisation or collaboration with business. Researchers focus on academic publications as the primary output of their research since they are not incentivised to consider commercial application.”

While Universities do a lot of research, they are first and foremost higher education institutions. They exist to teach subjects that should be taught by active researchers. Therefore, it is appropriate that University research focuses on academic publication.

The submissions from the Business Council of Australia and AusBiotech called out that other important aspects belong in the departments of Health, Defence and Industry. The BCA, in particular, provided an excellent diagram summarising the Australian R&D system. 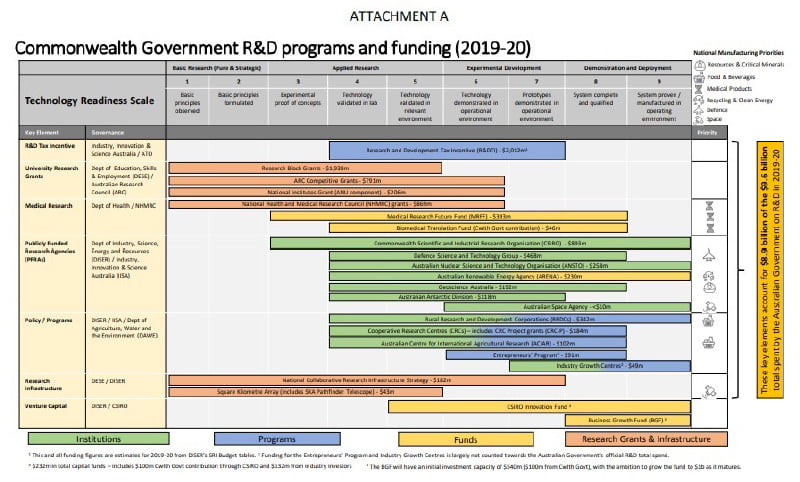 But apart from calling for a ‘whole of government’ approach, they provided little analysis of the issues on the industry side. Partly this stems from the focus on equating research commercialisation with startups.

But it ignores the issue of Australia fundamentally being a branch economy and the tendency of the multinational players in Australia to prefer to do research elsewhere. Moreover, R&D tax concessions to multinationals who barely pay any tax are also highly ineffective.

The Action Plan has a fixation on questions about the skills and experience of academics and business executives to engage with each other, writing:

“In the same way many university researchers lack the skills and experience to engage with business and industry, many of those in business also have a skill gap in their capacity to engage with universities and take advantage of the opportunities presented by research and innovation. For industry, the complexity of university structures and protocols can make finding a point of entry and navigating the system a challenge.”

The core issue isn’t the lack of skills or experience in engaging; it is that business in Australia sees little need to engage.

There is no shortage of executives that believe Australia’s role on the planet is to be a technology taker. Pushing Universities and their staff to pester business will not improve the situation.

The new funding in the Reform Agenda isn’t for research. The $1.6 Billion over 11 years to establish Australia’s Economic Accelerator – a new stage-gated program dedicated to funding translation and commercialisation in priority areas.

That is, it only flows to a research project that fits the linear model, and it funds the commercialisation process, not the research itself.

The first element of this is changes that have already occurred supposedly to Strengthen Australian Research Council arrangements in the national interest. Astute readers will note that ‘the national interest’ was the basis on which Minister Robert decided to reject some ARC funding proposals. This is just a strengthening of the concept of an authoritarian government knowing how to drive a research agenda.

Another element of this adjustment is changing the Research Block Grant funding to increase the allocation to a university for its increased generation of industry funding and to change researcher remuneration. That is, for university researchers to spend more time pestering industry for money.

The Department of Industry’s Modern Manufacturing Strategy had ‘Make Science and Technology Work for Industry’ as one of its pillars, which included aligning research capabilities and programs to the priority areas. That is what the CUR Action Plan notionally delivers.

The question that remains unanswered is the motivation for Australian industry in increased research and development spending. Listed companies have developed an excessively short-term focus, with more attention on quarterly earnings than future opportunities.

This has been compounded by changes to superannuation laws to focus super investors on the short term return of their funds.

The Modern Manufacturing Strategy had a one-line entry under the pillar of Getting the Economic Conditions Right for Business of ‘Building management capability.’ Yet the only action for that seemed to be the Global Business and Talent Attraction Taskforce.

Perhaps now that the Education department has finished its task of lecturing universities on how they need to do things with business, the Industry department can revisit its strategy.

They need to work out how to get businesses to invest in R&D at all and how to get them to value the skills and capabilities that Universities can offer.

While they are at it, they could remind businesses and the Department of Education that the bulk of the innovations that constituted Apple’s launch of the iPhone came from the social sciences and humanities.

As an example, the current most significant development requirement in renewable energy is building smart energy systems that households will adopt.

This is the second column on this subject in a two part series. You can read the first article here.

More funds to promote profile of women in STEM