Talking about how to respond to increasing fossil-fuel prices that we want to phase out of our energy system doesn’t seem like an innovation question. However, our response to any major change in our environment – doing things differently – is the widest definition of innovation.

We certainly need innovative thinking in response to the current global energy outlook.

The economic outlook in the October Budget stated, “electricity and gas bills are expected to rise sharply this year and next”. It continues noting that globally “gas prices are a key source of intensifying cost-of-living pressures for many consumers, having risen over six-fold since March 2021”. Finally, they quantified the bad news: “Electricity and gas prices are expected to directly contribute ¾ of a percentage point and 1 percentage point to inflation in 2022–23 and 2023–24, respectively”.

Before we look at what we should do, we need to know where we are.

A good place to start any discussion of energy is with the International Energy Agency’s Sankey diagram of Australian production and consumption of energy in 2020 (the latest available). The website is worth a visit), even if only to look at the animation of the flows changing from 1973 to 2020.

It is easier to look at the gas position using a pie chart (and easier using the IEA data than the ABS Energy Account). The standout feature is that over 80 per cent of natural gas is exported or used by the gas industry to liquefy the gas for export.

One is left to wonder how much supply might be available if cheaper forms of energy (for example, solar and wind) were used and how much it would cost. Unfortunately, these gas compression chains were built before electric motors could do the task. But it would be one way to get additional domestic or export supply. 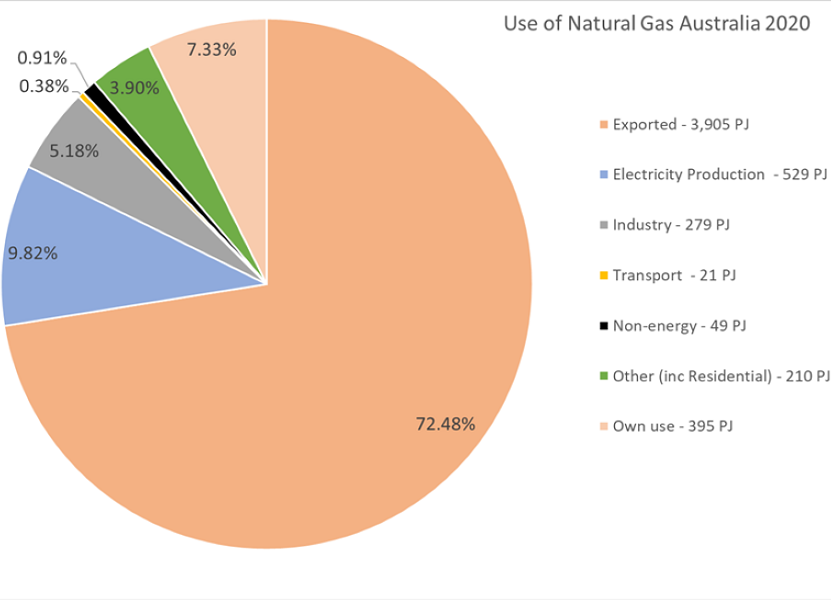 The use of gas to generate electricity has increased over recent years for several reasons. Not least, this was always the intent – coal-fired power stations take a long time to ramp up.

Long before renewables volatility, we needed gas to meet the peaks that couldn’t be met by coal. It was always dearer, but don’t be confused; the gas price has nothing to do with greater reliance on renewables in our electricity system.

But this need can be met by batteries and other storage. Indeed some of the electricity issues would have been less severe had Snowy 2.0 been completed last year as originally proposed.

Right now, additional storage can take the form of batteries. So while the current price spreads should be encouraging take-up, especially of larger “community batteries”, there are still price risks that governments could provide insurance against.

Industry use is mostly for heat. However, the Clean Energy Finance Corporation (CEFC) estimated in 2018 that industry could use 25 per cent less gas by investing in energy efficiency measures.

Typically, the issue for industry is that investments are lumpy, and new efficient technology will see assets retired before their useful life. That is why they aren’t leaving now – but it will present an opportunity to go in the future. Therefore, subsidies for gas energy efficiency in industry are needed now.

Similarly, the use of gas appliances in households, the fourth largest use (but less than 4 per cent), can and should be reduced. As Saul Griffiths has campaigned, replacing gas appliances with efficient electric ones is essential to meet our target ambitions.

The small amount of gas used for transport or non-energy uses (typically to manufacture feedstock hydrogen) can be replaced by green hydrogen.

So a strong focus on reducing demand is definitely an important strategy; it is certainly far more useful than increasing supply. However, increased supply won’t guarantee more or cheaper gas domestically.

The AFR has reported that Treasurer Jim Chalmers has indicated that price caps and/or a voluntary code of conduct could be implemented, while in the SMH on Saturday, Peter Hartcher listed former Treasury secretary Ken Henry’s suggestions. These included price caps and export limits, and he added putting a tax on exports, the size of which can determine how much domestic prices are below international prices.

Before considering any of these options, we need to form a view on how long we see the current position lasting. After all, in the story’s standard version, the high gas price was triggered by the war in Ukraine. But that is only half the story.

As the IEA’s Gas Market Report, Q3-2022 shows, the price of gas (annoyingly measured in $US per Million British thermal units – see note) started rising in Europe and Asia in 2020.

This still reflected the position of gas exports from Russia, where Gazprom was artificially restricting supply well before the war. (Note, commentators regularly falsely describe Australia as the world’s largest gas exporter, but that title belongs to Russia – we are merely the largest exporter of natural gas in liquid form, that is carried on ships rather than in pipes).

This chart, of course, begs the question of what the Morrison government was doing throughout 2021 as the prices increased. That is, other than suppressing the AER’s price advice before the election.

The chart also shows that the IEA is forecasting a decline in wholesale prices from this year in response to the actions taken in Europe to decrease gas reliance (many of them very similar to items listed above for industry and households). But even with price declines, these markets won’t settle anywhere near 2020 levels for quite some time.

While, in general, Australian producers need to face global input prices (for all inputs) to be efficient, facing the current global gas price level isn’t something they shouldn’t expect. However, the current circumstance is a price shock brought on by external events.

That price shock is simultaneously translating into super-profits for the gas producers from utilising an Australian public asset – resources in the ground. Economic logic says that these super-profits should be taxed and that domestic users should be subsidised so that gas prices don’t increase above a specified floor.

The floor should be set at the price we want to see applied in domestic markets, and $11/GJ is the right floor (according to industry) for domestic use and defining super profit.

Because we export five times as much gas as we consume, an excise tax on exports of 25 per cent levied on the excess of the price above the floor would provide enough revenue to the government to subsidise the gas price for domestic use to keep it at the floor. This is a simple transfer from the super profit to domestic consumers. It is not an unreasonable tax.

Politically it is a winner so long as the tax is hypothecated (that is, it can only be spent for a specified purpose). It is clearly only a tax on super-profits. It cannot be claimed to introduce “sovereign risk”, in that you haven’t reduced the expectation of available returns by investors (at least those who invested before the middle of 2021).

By fully hypothecating the tax to (a) domestic gas subsidies, (b) subsidies for gas energy efficiency investment in homes and businesses and (c) any other energy transition-related projects, it cannot be attacked politically as a ‘tax’ supporting reckless spending. Similarly, it can be quarantined from ministers who might like to do exactly that.

To create incentives for the gas producers to be efficient in their use of gas in the gas trains, the tax should apply to gas exported plus an adjustment to levy the same dollar value per GJ against the gas used in compression. This part should at least be announced, but it might take longer to implement.

The capping of the wholesale price should be achieved by subsidising purchasers – that is, gas retailers or large industrial companies. Implementation of both parts of the scheme can be announced to start from a date that is subsequently included in the legislation. Importantly the administrative procedures don’t need to be finalised for the policy to take effect.

This is an outcome that can’t be agreed upon between the industry players. Industry can’t collude on price, even if it is to reduce it. It needs intervention.

David Havyatt is a former telco executive, former adviser to Federal Labor ministers and former advocate on behalf of energy consumers. He is a long term observer of Australian innovation policy.